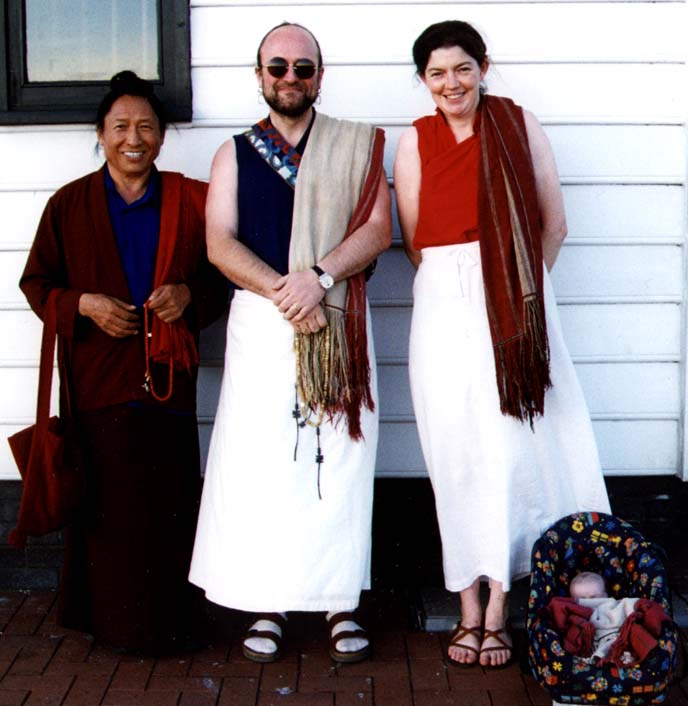 Tharchin Rinpoche was the Lineage Holder of the Repkong Ngakpa Tradition. He was a renowned Dzogchen exponent and accomplished master of Vajrayana arts. As a family-man with children of his own, Tharchin Rinpoche had a wonderful way with children and always enjoyed their presence in both formal and informal situations. This was enormously appreciated by all those apprentices who are parents.

This photograph was taken outside the ‘Norwegian Church’ in the marina area of Cardiff, on the occasion of Tharchin Rinpoche’s visit to the Bay Area of South Glamorgan. Tharchin Rinpoche gave several days of teachings there, to apprentices and to the students of Namkha’i Norbu Rinpoche, Chhi’mèd Rig’dzin Rinpoche, and several different Lamas living in Britain. The subject of the teaching was Lama Mipham’s commentaries on the Seven Line Song of Padmasambhava. It was a wonderfully inspiring Teaching in which Tharchin Rinpoche emphasised that realisation was possible through the practice of the Seven Line Song alone and that he had known such siddhas in Tibet who gained realisation in this manner. Tharchin Rinpoche requested Ngak’chang Rinpoche on several occasions throughout his teaching to sing the seven line Song according to the sem’dzin vajra melody called ‘The ‘Flight of the Vulture’.

The Seven Line Song of Padmasambhava is a central practice within the Confederate Sanghas of Aro and so these special teachings were very much appreciated. On this occasion Tharchin Rinpoche stayed at Ngak’chang Rinpoche and Khandro Déchen’s home and several apprentices stayed there too. During that time Tharchin Rinpoche regaled them with wonderful accounts of his life in Tibet. The apprentices were all very moved when Tharchin Rinpoche told them how lucky they were to have Ngak’chang Rinpoche as their Lama, and it was at that time that Tarchin Rinpoche announced that they should call their Lama ‘Ngak’chang Rinpoche’ rather than Ngakpa Rinpoche or Ngakpa Chögyam. Tharchin Rinpoche enjoyed shooting Ngak’chang Rinpoche’s air revolver in the garden and told stories of how his own father had many guns. He said that his father was a siddha who could heal people by firing guns at point-blank range into their chests. The bullets would apparently dissolve like quicksilver on impact and the person would recover from whatever it was that was ailing them. Tharchin Rinpoche said that many Ngak’phang Lamas in Tibet—such as DoKhyentsé Yeshé Dorje—possessed guns and other weapons as part of their vows, and that this weaponry symbolised the wrathful weaponry of realisation. In the last century Chögyam Trungpa Rinpoche exhibited the same enlightened affection for guns.