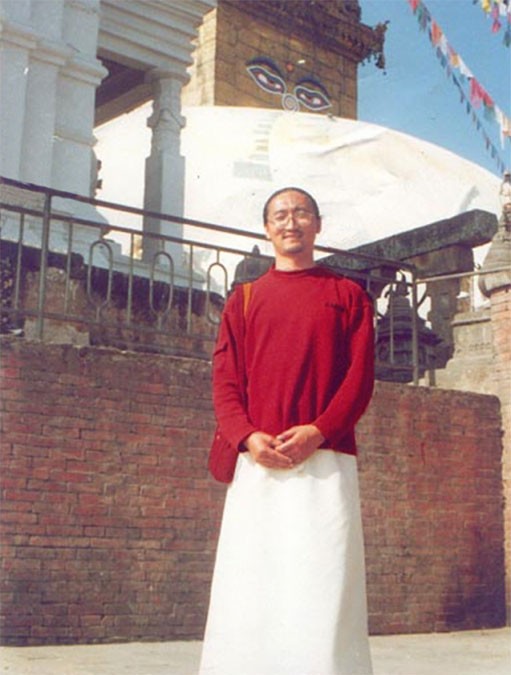 Ngakpa of the Nyingma Tradition

Lopön Ögyen Rinpoche was born on the auspicious tenth day of the tenth month of the Tibetan lunar year – 1967, the Fire-sheep year. He was born and raised in the far-northeast Amdo region of Tibet. His family belonged to the Nyingma gö kar chang lo tradition and he is a descendant of Nubchen Sang-gyé Yeshé of the 24th generation.

Lopön Ögyen Rinpoche comments:
The ngakpa tradition was strong in Amdo and Kham. Ngakpas were famous throughout Tibet for their yogic and meditative powers as well as for their manifestation of miraculous signs both when alive and upon death.

I consider myself extremely lucky to have been born in Amdo. Amdo is unique in giving rise to many realised Nyingma Lamas. The uniqueness of Amdo can be attributed to several causes. Firstly—unlike Central Tibet—the Nyingma lineage in this remote land was neither changed nor undermined over the centuries. The Nyingma lineages in Amdo can be traced directly back to the Padmasambhava and Yeshé Tsogyel and their twenty-five main disciples. At that time the Tibetan emperors sent Mahasiddhas to the fore to employ Tantric power against the Chinese invaders. Amongst them were Nubchen Sang-gyé Yeshé’s sons and Palgyi Seng-gé. Theses Lamas later settled in Amdo, and their lineages of teaching and practice have survived up until the present day.

During the reign of the Langdarma, when Dharma was suppressed and eventually destroyed in Central Tibet, a great number of well-known Mahasiddhas took asylum in Amdo, bringing with them the wisdom lineage they had received from Padmasambhava and Yeshé Tsogyel.

Scholars divide the spread of Dharma in Tibet into two phases: the First or early spread and the Second or later spread. Amdo, however, is in some ways an exception to this codification, as it is the only part of Tibet where the first spread remained entirely intact as an overt tradition. This is because the gö kar chang lo dé (gos dKar lCang lo’i sDe) had no need to hide themselves in Amdo – they have always been able to practise openly there.

As a young ngakpa in Amdo I inherited two lineages presented: my family lineage (Pa Gyüd) and the lineage of my Lama (La Gyüd). As eldest son of my family, I was destined to carry their lineage and become a ngakpa, and thus the Pa Gyüd was of great importance to me. I had the good fortune to receive the transmission of both the Pa Gyüd and La Gyüd at the age of 16, and so was able to develop both lineages. From the Pa Gyüd I was introduced to the meditations of Shi-nè and La-thong, as well as rituals and yogic practices. I received many experiential teachings from my Lama which enabled me to combine the two systems of Pa Gyüd and La Gyüd. This helped me develop my understanding and became the foundation of my current practice.