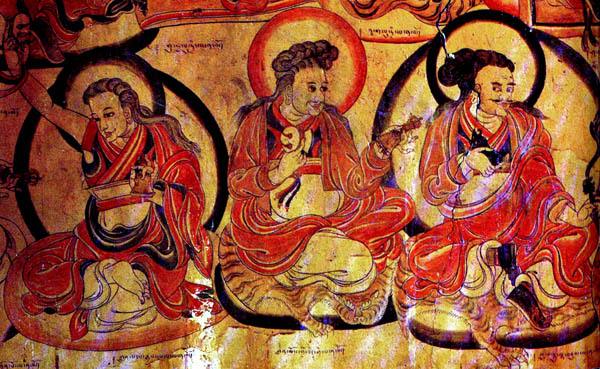 This section from an unidentified mural in Tibet depicts aspects of the gö-kar-chang-lo’i-dé which although customary, are rare in painted depictions. Here we can see the ordained robes in their full form: the full white pleated white shamthabs (religious skirts); the red, white and blue striped ngak’phang shawls; the conch shell earrings; the tiger skin seats; the bell (drilbu – dril bu – ghanta), Vajra (dorje rDo rJe), damaru (chö-nga chos nga), phurba (phur ba – kila) and ngak-ru or mantra horn. Unfortunately the U-med Tibetan script is too small and obscured to decipher with any degree of accuracy, so we are unable to furnish details as to who these Lamas may have been or when they lived.

This traditional Tibetan mural shows that the gö-kar-chang-lo’i-dé were not merely ‘lay practitioners’ as is often assumed from the way they tend to be depicted, i.e. wearing variants of lay costume. The gö-kar chang-lo dress is actually identical to the robes of monks and nuns in all but colour. One also sees here the same convention as the Aro gTér lineage in which the gö-kar-chang-lo’idé were not permitted to wear yellow. We also see here the use of red rather than maroon – another facet of the robes worn by the gö-kar chang-lo’idé of the Aro gTér tradition. Khyungchen Aro Lingma advised the return to the colour advised by Padmasambhava when it became necessary to subdue the tirthikas who espoused the philosophies of the four extremes. In a similar way to the way in which Jé Tsongkhapa advised a return to yellow robes, Khyungchen Aro Lingma advised her disciples to return to red in preference to maroon. The robes of the Aro gTér ordained sangha are therefore all pure red, white, and blue – the colours of the rTsa rLung channels.

The hair styles shown are as follows –left to right:
The first Lama wears the Phodka Ling-ngé (phod ka ling nge) flowing hair style – which was common to the women of the Aro gTér Lineage. This style continues to be worn by ordained female Aro gTér practitioners in the Confederate Sanghas of Aro.
The second Lama wears his hair in the Thor tshug (thor gTshugs) plaited or braided topknot.
The third Lama wears his hair in the Thor chog (thor cog) plaited or braided bun. This is the style in which Ngak’chang Rinpoche usually wears his hair – although when he was a young man he wore his hair wrapped around a takdröl in the Thor tshug style.