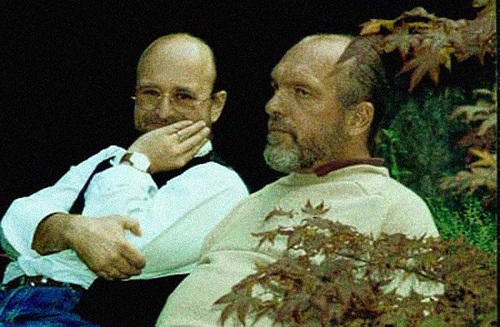 In the early Summer of 1994 Keith Dowman spent a day with Ngak’chang Rinpoche and Khandro Déchen’s apprentices giving teaching on the subject of Dzogchen men-ngag-dé. It was a cheerful day with many questions and answers. Ngak’chang Rinpoche has met with Keith Dowman on several occasions in Cardiff, Bristol, London, Switzerland, and Kathmandu. Keith Dowman will be known to many Vajrayana practitioners as the author of many excellent books and clear insightful translations of Tibetan texts from the Nyingma and Kagyüd lineages – two of his best loved books being ‘The Divine Madman’ and ‘Sky Dancer’.

‘The Divine Madman’ subtitled ‘The Sublime Life and Songs of Drukpa Künlegs’ is an excellent example of the style of the Mahasiddhas which has always been the heart of Vajrayana in every epoch. Ngak’chang Rinpoche comments:
In the 20th Century we found this style in such wonderful Masters as Kyabjé Künzang Dorje Rinpoche. These Lamas are Mahasiddhas and they communicate as mahasiddhas. The linguistics of each Lama are unique but the thread of the Mahasiddha’s doha is found in each. The mahasiddhas would always upset their prospective disciple and give what was asked in such a way as to make it inaccessible unless an authentic breakthrough could occur. The disciple would have to overcome his or her barriers of ideology and social convention before receiving transmission.

Here is an example from ‘Divine Madman’. An old man comes to Drukpa Künlegs seeking to take refuge, and so Drukpa Künlegs instructs him to recite the following verse whenever the old man thinks of him:

The old man rather than being shocked takes this Drüpthab to heart and gains liberation through it.