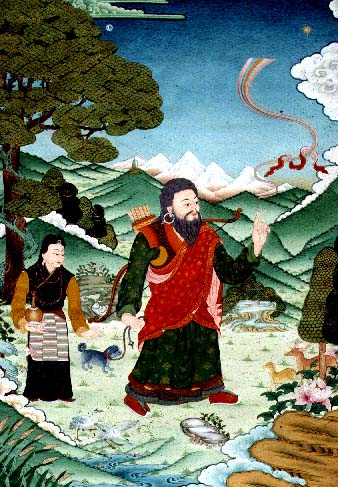 the enlightened madman of the Dragon Kagyüd

This thangka was painted in recent times by Kumar Lama – an accomplished thangka painter who resides for periods at Pema Osel Ling – the retreat land of Lama Tharchin Rinpoche.

Drukpa Künlegs was an illustrious Wisdom-chaos master of Kagyüd-Nyingma lineage. Although he is often described as a Kagyüd (bKa’ brGyud) master, the texts which refer to him often use the spelling dKar brGyud – which actually means ‘White Lineage’ and is a term which applies to the gö-kar-chang-lo’i-dé. (bKa’ brGyud and dKar brGyud are homonyms in the Tibetan language.)

Drukpa Künlegs (Chos rJe ’brugs pa Kun dGa legs pa, 1455-1570) was an incarnation of the mahasiddha Saraha (8th-9th century), and he displayed the reality of this lineage with the bow, and quiver of arrows he carried. In this thangka he is accompanied by his hunting dog and by one of the many female disciples who gained realisation as a result of accomplishing karmamudra with him.

An excellent book is available on Drukpa Künlegs, called The Divine Madman – the sublime life and songs of Drukpa Kunley by Keith Dowman (Ngakpa Künzang Ten’dzin). This delightfully translated book gives wonderful insights into the life of a ngak’phang Lama of the wisdom-eccentric style.

In his introduction, Keith Dowman writes:
… the unique ingredients of this hagiography are a positive attitude to sex, an antipathy to organised religion and priestcraft, and the anarchic life-style of an itinerant mystic, would prove an ideal vehicle to carry the Tibetan Buddhist Tradition to those who would never read a formal exposition of the doctrine.

The gö-kar-chang-lo’i-dé can be characterised by a greater empathy with the lay folk – inasmuch as they are not divided from the laity with regard to family life and the non-institutionalised setting in which they mainly practise. This has often caused confusion to people who assume that the gö-kar-chang-lo’i-dé are ‘lay Tantrikas’ rather than ordained Vajrayana practitioners. No one who practises the Vajrayana can be described as ‘lay’. Drukpa Künlegs here displays his ordained status in the wearing of a waistcoat which would only be worn by an ordained sangha member.

Khandro Déchen comments:
Drukpa Künlegs is an important figure in the transmission of the mahasiddha tradition in Tibet. Masters of this type have manifested throughout the history of Tibet – right up until the present day. Chögyam Trungpa Rinpoche was just such a master, and so too is Kyabjé Künzang Dorje Rinpoche. It is this vital and vibrant tradition of realisation which prevents the ossification of Dharma into codified dogma and closed-minded scholastic rigidity.