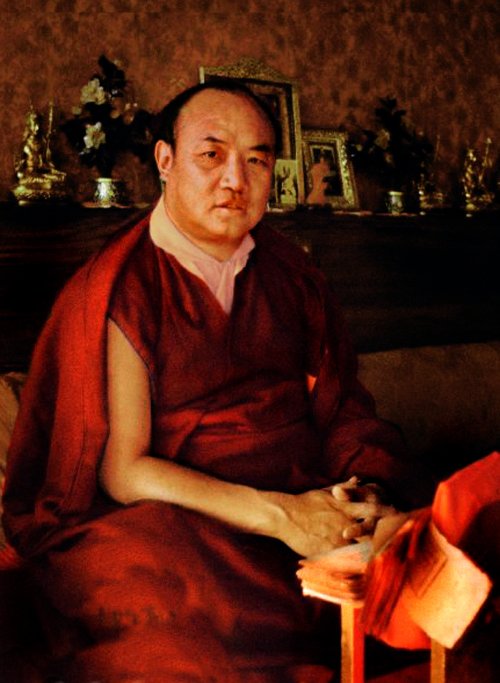 In 1971 Karmapa Rangjung Rigpa’i Dorje gave many transmissions at Rumtek and many statues of Buddhas and Mahasiddhas were completed. In 1974, Kalu Rinpoche—one of the great Vajrayana masters—visited the west for the first time and was soon followed by Karmapa Rangjung Rigpa’i Dorje at the invitation of Chögyam Trungpa Rinpoche. He performed the Vajra Crown ceremony numerous times on his travellers and was a great inspiration for the establishment of Vajrayana in Britain.

The Karmapa visited the Hopi Native American Reservation, in the Southwest of the United States where he performed the empowerment of Red Chenrézigs and was acclaimed for ending a long drought. The Hopi elders proclaimed that Karmapa Rangjung Rigpa’i Dorje fulfilled the following prophecy:
When religion in the west declines, those from the East wearing Red Hats will become true friends of the Hopi people.

In 1976, Karmapa Rangjung Rigpa’i Dorje visited New York and in 1977 began a world tour visiting giving Vajra Crown ceremonies everywhere he went. Ngak’chang Rinpoche attended nine Vajra Crown ceremonies during this period and counts himself exceedingly fortunate to have had several audiences in which he was able to receive encouragement for the propagation of the gö-kar chang-lo’i dé (gos dKar lCang lo’i sDe). Ngak’chang Rinpoche comments:
The 16th Karmapa—Rangjung Rigpa’i Dorje—was an astonishing Lama and a remarkable presence in the world. During his day, people following Lamas of every school would attend his empowerments and Vajra Crown ceremonies. It was as if the concept of sectarianism was unknown at that time, and in Britain at least there was a sense of tremendous openness and joy in respect of Vajrayana. In the mid 1970s I spent some time in Mid Wales at ‘Karma Naro’ (Llanigon, near Hay-on-Wye) where I had been requested to paint symbolic motifs in what was to be the private chambers and shrine room of Karmapa Rangjung Rigpa’i Dorje. There was a glorious sense of inclusiveness amongst people at that time, and the real sense that a great Lama was arriving who was both ‘of our world’ and utterly beyond it. The fact that Karmapa Rangjung Rigpa’i Dorje was the embodiment of Chenrézigs was not a question of mystic speculation or reverential attribution – it was a fact for all who were privileged to meet him. It is extremely sad that with the departure of Kyabjé Düd’jom Jig’drèl Yeshé Dorje there are few such great Lamas left, other than Dung-sé Thrin-lé Norbu Rinpoche, and our own Root Lamas Kyabjé Künzang Dorje Rinpoche and Jomo Sam’phel.