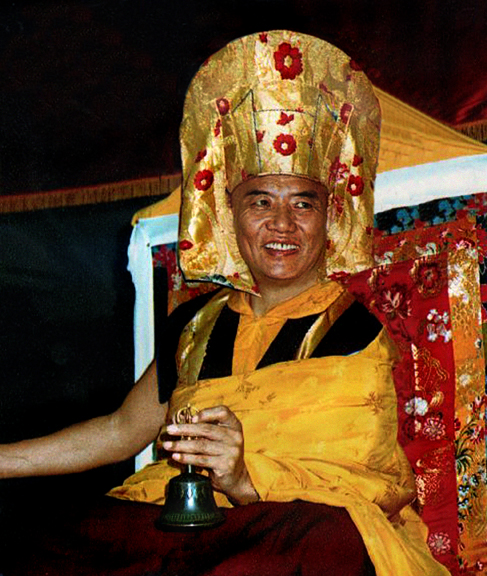 The 16th Karmapa—Rangjung Rigpa’i Dorje (Rang ’Byung Ri pa’i rDor rJe)—took incarnation on the fifteenth day of the sixth Tibetan month in 1923 near the Dri-chu river. He was born to the royal family of the Der-gé—Kham—Eastern Tibet. His family lineage was named A-tup, his mother was Kèlsang Chödrön and his father was Tséwang Paljor.

When his mother heard that it was predicted that she held a great being within her, she retired immediately to one of Padmasambhava’s caves and remained there for the remainder of her pregnancy. The day before the 16th Karmapa was born, his corporeal form dissolved within his mother’s womb, as if she had never been pregnant. After giving birth, his mother determined not to notify others concerning her child’s greatness in case he was taken away to a monastery. On making this decision the water in the offering bowls at her parent’s home turned into milk. Shortly after his birth the 16th Karmapa took seven steps and told his mother: Even so – I will have to go away.

Based on the prediction letter bequeathed by the 15th Karmapa Kunzang Kha’kyab Dorje (Kun bZang mKha’ khyab rDo rJe – 1871-1922), Rangjung Rigpa’i Dorje was soon discovered in spite of his mother’s efforts to conceal him.

Karmapa Rangjung Rigpa’i Dorje predecessor’s belongings were returned by Khyentsé Chökyi Lödrö Rinpoche, after which he travelled to Tsurphu where he was welcomed by Nénang Pawo Rinpoche, Goshir Gyaltsab Rinpoche, and Jamgön Kongtrül the Second. By the time he was eight years old, he had received the empowerment of Dorje Phagmo (rDo rJe phah mo – Vajravarahi). At Tsurphu Karmapa Rangjung Rigpa’i Dorje performed the Vajra Crown ceremony for the first time, and those present witnessed flowers rain from the sky. Many miracles attended him throughout his childhood, and even as an infant Rangjung Rigpa’i Dorje was able to find runaway animals by giving precise indications as to their whereabouts.

Karmapa Rangjung Rigpa’i Dorje was enthroned at Tsurphu by Tai Situ Rinpoche and the Gyalwang Drukpa, and began to receive transmissions and empowerments such as the Treasury of the Kagyüd Lineage and of Sacred Instructions, and the Rinchen gTerdzod from Jamgön Kongtrül. He received the gTérma of Chö’gyür Lingpa from Tulku Ögyen Rinpoche, and the entire Sutras and Commentaries from Gangkar Rinpoche. He also received transmissions of the Sakya lineage.

The young Karmapa displayed great abilities, such as recounting his former lives to Gangkar Rinpoche and leaving footprints in rocks. He startled the Drukpa Kagyüd Lama Paljor Rinpoche by tying knots in his sword. He also danced without anxiety in the precincts of a snake infested hot spring and was unharmed. He ended a drought at Dil-yag where the water in which he bathed caused a spring to appear. In 1945 he went on pilgrimage to Bhutan, where he performed the Vajra Crown ceremony. He then visited Samyé in central Tibet and the Drowo Lung where Marpa had presided.

Karmapa Rangjung Rigpa’i Dorje gave transmission of the gTérma of Chö’gyür Lingpa to HH Kyabjé Minling Trichen Rinpoche, the current Head of the Nyingma tradition. He then gave rare transmissions to thirteen specially chosen Lamas, including Rig’dzin Chögyam Trungpa Rinpoche, Kalu Rinpoche, and Akong Tulku – the three Lamas who were foremost in the preservation of the Kagyüd lineage in the west after the passing of Karmapa Rangjung Rigpa’i Dorje.

Karmapa Rangjung Rigpa’i Dorje left Tibet with a party of one hundred and sixty individuals, including Dilgo Khyentsé Rinpoche, Gyaltsab Rinpoche, and Pönlöp Rinpoche. They journeyed through Lodrak where Milarépa had built towers for Marpa, and in these and other places Karmapa Rangjung Rigpa’i Dorje’s entourage performed practices on their journey to Bhutan and exile from Tibet.

Before arriving in Bhutan, Karmapa Rangjung Rigpa’i Dorje exhorted his entourage to continue even though they were tired and wished for rest. His concern proved to be well founded as there was a heavy snow fall which would have obstructed their path – and the Chinese soldiers were close behind them.

At Losar in 1966, Karmapa Rangjung Rigpa’i Dorje inaugurated the completion of the building of Rumtek. The sacred relics, Black Vajra Crown, ritual implements, and other dharma possessions which were brought from Tsurphu, across the Himalayas during Karmapa Rangjung Rigpa’i Dorje’s escape into exile, were then instated at Rumtek. Rumtek became a centre of learning in which many tulkus received training.

Karmapa Rangjung Rigpa’i Dorje encouraged the construction of religious institutions in Nepal near the Chörten at Bodha. In 1967, he visited Bhutan and blessed the Royal Family, who offered land and palaces, and then he went on pilgrimage to Taktsang – the Tiger’s Nest Cave of Padmasambhava. Chögyam Trungpa Rinpoche later also made a pilgrimage to Paro Taktsang, where he received the gTérma called the ‘Chagchen Drüpthab’ (Sadhana of Mahamudra – Method of Accomplishment According to the Great Gesture).