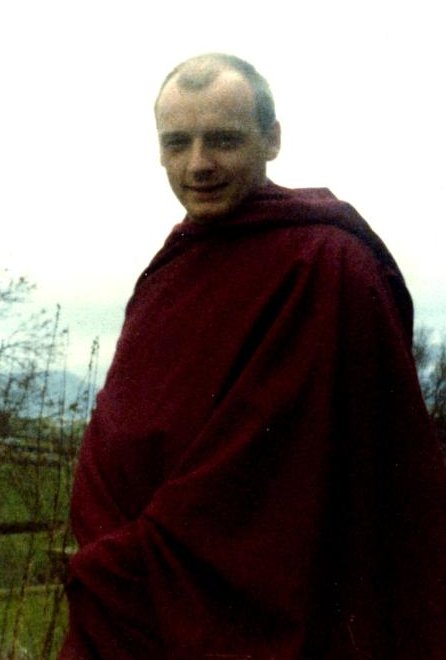 It could be said that Gélong Thubten Gyatso was Ngala Nor’dzin Pamo’s first Buddhist Sutrayana teacher – Géwa’i Shényén (dGe ba’i bShes gNyen – kalyanamitra – spiritual friend). Ngala Nor’dzin had been studying Buddhism for a while, but had not followed through into actual guided practice; and so when in 1980 she noticed an advertisement for a retreat at the Lam Rim Buddhist Centre in Wales she was keen to attend. She was living in Stoke on Trent in Staffordshire at the time studying ceramics.

Ngala ’ö-Dzin comments:
Thubten Gyatso was my first experience of a Western teacher. It was refreshing to be able to ask questions and know that the context of the question would be fully understood. Thubten Gyatso had a great sense of humour and really brought the teachings to life. I remember him describing our experience of samsara as being similar to feeding cushions to an elephant – that is to say: we think we are engaged in rational activity but in actuality we are deluded.

Ngala Nor’dzin continues:
I was still coming to terms with the loss of my father who died in violent circumstances, and at first it did not seem to be the ideal type of retreat for my situation. Retreatants were in silence. The practice was mostly either silent or guided meditation – and based on the teachings of the previous week which I had missed. It was a profound experience however, and later Ngak’chang Rinpoche told me that people in the West have become indoctrinated by the idea that they have to talk about their emotions with others in order to be able to live in a normal way after bereavement or loss.

During the retreat, quite inexplicably, I was able to fully comprehend—in the moment—both the practices and the teaching which was given in support of the practices. This was the more astounding given that I had missed the previous week. I discovered within myself a natural affinity for practice and meditation and an ability to find presence of awareness. We each had the opportunity for an interview with Thubten Gyatso during the weekend. I explained to him the tragic circumstances which had led me to the retreat, and my hope that through Buddhist practice I would find peace of mind and also be able to help my mother.
‘That is so rare’ was his reply.