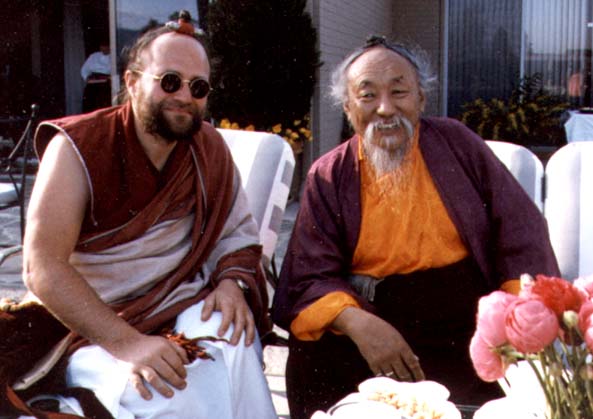 With His Eminence Chag’düd Tulku Rinpoche

Ngak’chang Rinpoche first met HE Chag’düd Tulku Rinpoche in Britain in the Summer of 1985 when he gave an intensive Phowa retreat in the mountains of North Wales. They met on various occasions since then, much to Ngak’chang Rinpoche’s delight. This photograph was taken on a fund-raising event which was organised by the Mondavi Winery in Sonoma to which Ngak’chang Rinpoche was invited.

HE Chag’düd Tulku Rinpoche (1930 – 2002) was a ngak’phang Lama of the Nyingma tradition whose life story can be read in the excellent book ‘Lord of the Dance.’ This book contains rare insights into the non-monastic spiritual culture of Tibet and gives a unique account of several highly revered yoginis, including his own mother. This book is essential reading for anyone interested in the gö-kar-chang-lo’i-dé (gos dKar lÇang lo’i sDe) – the ordained non-celibate sangha of the Nyingma tradition.