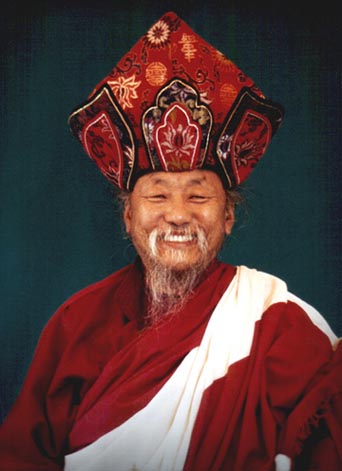 Chag’düd Rinpoche (1930 – 2002) was a ngak’phang Lama of the Nyingma tradition, who taught widely in the United States and lived in Brazil. This photograph was taken in Cardiff in 1986 when Chag’düd Rinpoche visited Ngak’chang Rinpoche and Khandro Déchen in their home. He is wearing the Dorje Zahorma hat of his tradition and the red and white striped shawl of the ngak’phang tradition.

Chag’düd Tulku and Ngak’chang Rinpoche met on several occasions in California – the last and most auspicious occasion was the first Drüpchen held at Pema Osel Ling. There was a delightful warmth between the students of all the Nyingma Lamas on the West Coast of the USA.