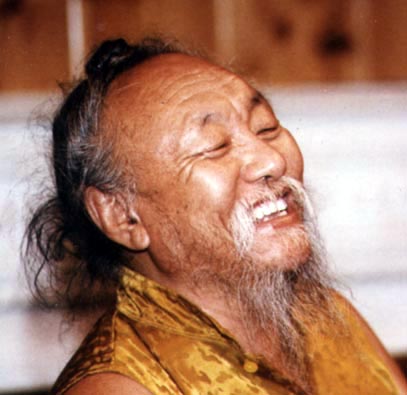 a remarkable ngak’phang Lama of our time

His Eminence Chag’düd Tulku Rinpoche (1930 – 2002) was a remarkable ngak’phang Lama – born in Kham, Eastern Tibet. The first of many amazing occurrences and circumstances to mark his life was the prophetic meeting of his mother with his predecessor:
The lama [who] had travelled many days looked at the seventeen-year-old woman seated with the high lamas. In his meditation she had appeared to him as the deity White Tara, with eyes on her hands, feet, and her forehead. He summoned her and told her they had only had a brief connection in this lifetime but in the future they would have a much deeper connection, and offered her a reliquary box as a sign. – from ‘Lord of the Dance’ by Chag’düd Tulku.

When the previous incarnation of Chag’düd Tulku died, he was reborn as the son of the young woman, Délog Dawa Drölma. Chag’düd Tulku was recognised when he was four years old. His youth was spent in religious training interspersed with activities necessitated by the life of a nomad, in which he particularly enjoyed listening to the epic tales of Ling Gésar – the enlightened warrior.

The old bard was blind and legless, but when he sang the epic songs of Gésar, we lived inside his stories. He could sing them for a month and never repeat himself. – from ‘Lord of the Dance’ by Chag’düd Tulku.

While still young Chag’düd Tulku experienced the nature of Mind and found it easy to leave behind mundane concerns. This was demonstrated by his giving up any right to the personal fortune of his mother after she died by committing everything she left him to the creation of a Dorje Sempa chörten.

Chag’düd Tulku spent most of his teens and twenties completing the two Lama khorlos: ‘study and empowerment’, and ‘retreat and accomplishment’. He was famous for his ability to create or stop rain or snow, having spent many years focusing on the yidam Drölma which was suggested by both Trom-gé Trungpa Rinpoche and Séchen Rabjam. The following is a partial list of his Lamas and the teachings he received from them: he received a Mahamudra transmission from Séchen Kongtrül; from Khenpo Jampal Zangmo he received an empowerment of the 100 peaceful and wrathful yidams, teachings on the six bardos and chod; Séchen Rabjam suggested that he focus on the practice of Tara and gave him the initiation of Green Drölma; from Trom-gé Trungpa Rinpoche he received Dzogchen teachings; for a month he received instruction from Minling Khenchen; from Kyabjé Düd’jom Rinpoche – Jig’drèl Yeshé Dorje he received the Kanjur and Düd’jom gTér; and there were many others. His accomplishment was witnessed in his insightful teachings, unstinting effort in propagating the Düd’jom gTér, and in his profound kindness and generosity.