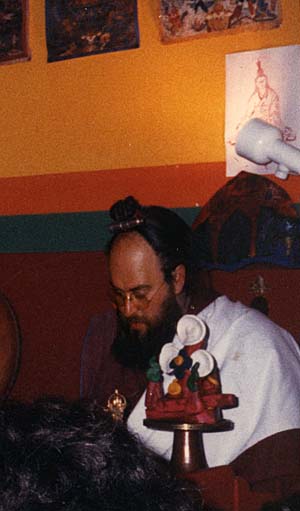 Chhi’mèd Rig’dzin Rinpoche appeared in extraordinary garb, a mixture of maroon robes and an orange silk professorial gown from Shantiniketan university. He added to this a part-set of bone ornaments, and the aforementioned takdröl. I never knew Chhi’mèd Rig’dzin Rinpoche to require the participants to prepare in any special way for a dBang; nor private time for his own preparation in the gompa. Whatever he required for his own purposes was inscrutable, a matter he might have taken care of before appearing at an event. As a Speech Incarnation of Padmasambhava, it would seem impossible to conceive and presumptuous to speculate, what kind of ‘preparation’ he might require. He would launch directly into his invocation, as he did now. After the empowerment one lady revealed that she had practised twenty years waiting for the chance to attend a wrathful wang (dBang) like this, given in the direct sadhana style of inner Tantra, typical of the gö kar chang lo’i dé (gos dKar lCang lo’i sDe). Chhi’mèd Rig’dzin Rinpoche’s directness frequently meant freedom from expected kinds of relative decorum; particularly of speech.

A few years after this episode Ngak’chang Rinpoche dumbfounded me one day by presenting me with this same takdröl. He said: ‘I would like you to keep this for the time being.’ Nowadays Ngak’chang Rinpoche has another takdröl, a gift from Kyabjé Künzang Dorje Rinpoche, but he wears that on his gom-tag. He also possesses a splendid gold one, a replica of that worn by Yeshé Tsogyel in her Aro gTér root form, topped with a flaming skull. At a later date, Ngak’chang Rinpoche told me I should wear his former takdröl whenever I wore robes, as Chhi’mèd Rig’dzin Rinpoche had suggested that he should pass his old takdröl on to me when the time came for me to give empowerments. At a later date again Ngak’chang Rinpoche instructed me to attach a skull to the takdröl – again on the advice of Chhi’mèd Rig’dzin Rinpoche.