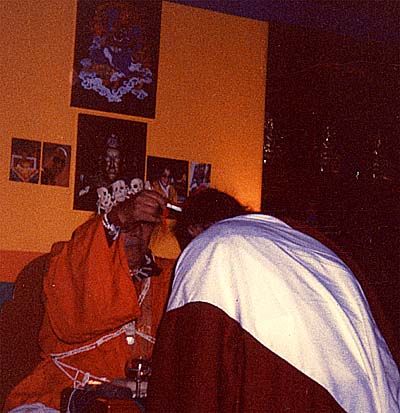 Ngak’chang Rinpoche—when asked by disciples about his life story as a Lama—made the following comment:
I had little idea when I returned to the West that I was to become—in certain circles—a figure of controversy and disputation. The fact that I wore a takdröl seemed upsetting to some, by virtue of an idea that Western people should not display Tantric regalia per se. So, rather than offend people I discontinued wearing the takdröl. The ‘offence of my being’ however, has continued almost unabated (ed. December 2007). In view of attitudes prevalent amongst the outspoken in 1988, I requested Chhi’mèd Rig’dzin Rinpoche to take custody of the takdröl. I could not return it to Lama Yeshé Dorje Rinpoche, as I lacked the wherewithal to return to India – and as Chhi’mèd Rig’dzin Rinpoche was one of the Root Lamas of Lama Yeshé Dorje Rinpoche, I thought it best to entrust it to him. Chhi’mèd Rig’dzin Rinpoche accepted the takdröl and proceeded to wear it himself. I was most glad to see it – most moved, and—for the want of a better word—‘humbled’. Chhi’mèd Rig’dzin Rinpoche is a Lama who could wear anything and lend supreme dignity to it by so doing – even something around which I had wrapped my noisome locks.