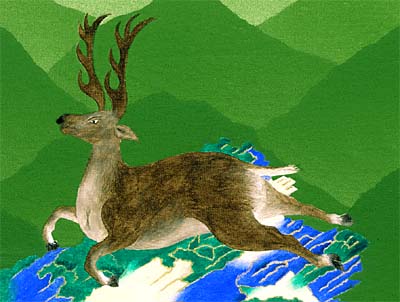 Khandro Déchen says of the symbolism of the deer:
Deer are shy by nature, and their presence in a landscape represents a dimension where fear is unknown. Deer appear in couples, male and female indicating harmony, happiness, and fidelity. The deerskin meditation rug is seen in many paintings of yogis and yogini, because its use enhances the solitary tranquillity and awareness required by the practitioner. One can find images of famous yogis such as Milarépa, Réchungpa, and Thangtong Gyalpo sitting upon deerskins – as well as yoginis such as Mandarava and Kala Siddhi. Chenrézigs is sometimes depicted wearing the skin of a magical deer draped over his left shoulder as a symbol of love. This magical deer is an extremely evolved creature which renders itself visible only to those with evolved kindness – those with demonstrable bodhicitta. The magical deer is said to be able to discern the human thought and speak in human languages – another aspect of the communicative quality of compassion. The soft compassionate eyes of the deer, particularly the gazelle, reflect the significance of the name Chenrézigs: he who gazes with compassion over all realms of being.