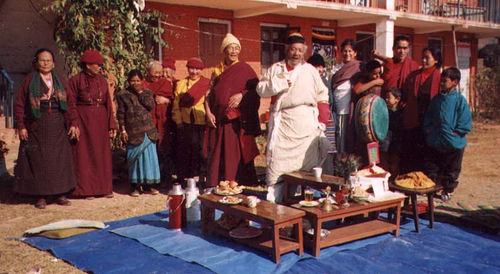 a powerful place of pilgrimage

Yang-lé-shöd is known throughout the Vajrayana world as one of the most powerful pilgrimage places associated with Padmasambhava and Yeshé Tsogyel. It was here that they accomplished the realisation of Dorje Phurba (rDo rJe phur ba – Vajrakilaya – the wrathful aspect of Donyöd Drupa / Amoghasiddhi).

A group of elderly Nyingma yogis and yoginis live and practice in permanent semi-open retreat, a short walk from the Gompa of the great Nyingma Lama, Chatral Rinpoche. These wonderful old people had nowhere to live and were unable to devote time to their life-long practice commitments due to their necessary struggle to survive in a climate which was not unduly conducive to non-monastic practitioners. Both Lama Gyaltsen and Ngak’chang Rinpoche were deeply concerned about the plight of elderly members of the gö-kar chang-lo’i dé (gos dKar lCang lo’i sDe) and wished to help them, not simply for their own sake but for the future of the Nyingma Tradition and its non-celibate wing.

Tsogyel Gé’phel Jong was blessed for five years with the presence of the spiritual patrons of the Confederate Sanghas of Aro: Kyabjé Künzang Dorje Rinpoche and Jomo Sam’phel, and during that time many apprentices visited to spend time in their presence.

Even though Kyabjé Künzang Dorje Rinpoche and Jomo Sam’phel have relocated to Bodha—to live near the Great Chörten—Tsogyel Gé’phel Jong remains an important Himalayan connection for the Confederate Sanghas of Aro – both because of its proximity to the Padmasambhava and Yeshé Tsogyel caves of Yang-lé-shöd and because of our close ties with many of the residents. Amongst the residents are two old friends of Ngak’chang Rinpoche – Lama Lödrö Rinpoche and his Sangyum Khandro Nyida Wangmo.