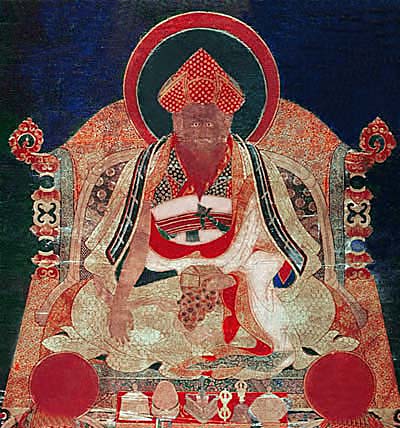 detail from a Tibetan wall mural

This fresco of a gTértön is possibly Chö’gyür Lingpa (’gro ’dul mChog ’gyur bDe chen gLing pa, 1829-1870). Chö’gyür Lingpa was a gTértön and contemporary of Jamyang Khyentsé Wangpo and Jamgön Kongtrül. He was regarded as one of the major gTértöns. His gTérmas are practised by both the Nyingma and the Drukpa and Drigung Kagyüd traditions which have a great affinity with the Nyingma ngak’phang tradition.

This image is of great interest with regard to how it displays the emblems and accoutrements of a ngak’phang Lama. The Lama pictured is a gTértön – evidently a discover of sa gTér or ‘earth treasure’(1), because he holds a gTér casket in his left hand in the same style as Rig’dzin Go-dem – the gTértön who revealed the Chang gTér (byang gTer) or Northern Treasures(2).

He wears the Nyingma Ögyen Zahorma hat and a white shamthab or skirt. The white shamthab of the gö kar chang-lo’i dé (gos dKar lCang lo’i de) is the same in style as that of a monk or nun – only the colour is different. There is a phurba in his belt – characteristic of the Nyingma tantrika and a phurba also rests before him on his throne table – standing in a triangular box to indicate his power of subjugating negativity. He is swathed in the red, white and blue robes of a ngakpa – but they are regal in their pattern.

Ngak’chang Rinpoche says of this style of ngak’phang robe:
This glorious brocade clothing is something which is usually more associated with the highest of the monastic hierarchy – but here they represent ‘royalty’ in terms of the magnificent power of the Vajrayana to transform all appearances and to overawe negativity with sheer non-dual splendour.

1 The word gTérma can be translated as ‘visionary revelation’ but this term is inadequate to describe the range of teachings, practices, and inspirational rTen (sKu gSung thugs rTen) or supports for practice which relate to body, speech and mind. gTérma is the most important style of transmission for the gö kar chang-lo’i dé (gos dKar lCang lo’i de). The styles of transmission within the Nyingma tradition are as follows: