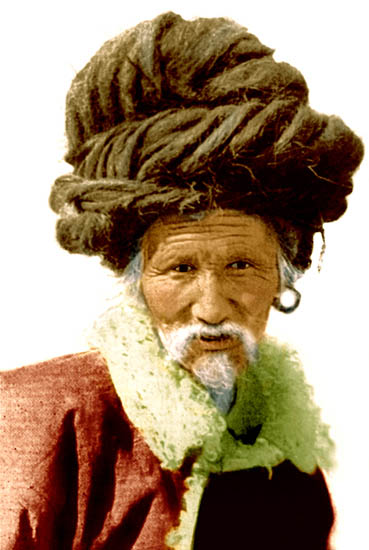 Ngakpa Shérab Dorje Rinpoche was a Dzogchen master who lived an ordinary life as a yak herder integrating each moment with practice. Such Lamas were often disregarded by those who expected Lamas to be dressed in brocade.

Ngak’chang Rinpoche comments:
With regard to Dzogchen, there is a saying which runs: ‘the lower the vehicle, the higher the throne’. This saying is based on the need for pure vision in terms of the Lama at the outset of the Tantras. In the outer Tantras, the Lama is seen as entirely ‘other’ because the outer Tantras emphasises purification and it is important from that point of view that the Lama is as different as possible for the condition of the student. As one approaches the Inner Tantras however the difference lessens, due to the emphasis of the beginningless enlightenment of the student. In terms of Dzogchen however, little divides the student and teacher apart from the natural devotion of the student. In Dzogchen devotion is not based on ‘otherness’ but on the student’s direct insight into the non-dual status of the Lama. The nature of devotion in Dzogchen is subtle and entirely spiritually adult. In Dzogchen the student is not dependant on the Lama’s elevated otherness – but on the Lama’s non-dual realisation.

In terms of the Dzogchen view the student’s appreciation of the Lama is based on the non-dual state and on the student’s experience of the non-dual state. This recognition constitutes living the view of Lama’i Naljor and enables a degree of ‘equality’ in which the artificial constraint of democracy is a hindrance. The student follows the Lama’s instruction on the basis of direct knowledge.

Dza Paltrül Rinpoche may have looked quite similar to Shérab Dorje Rinpoche in many external respects, as he too wore a sheepskin chuba coat on most of his wanderings and wore his hair in the same Zur phud style.

Those who become fully realised often manifest multiple incarnations; usually three, belonging to the categories of body, speech, and mind. The body incarnation would continue the physical activities of the previous Lama. The mind incarnation would continue the inspirational quality of the previous Lama’s presence. The speech incarnation would continue the previous Lama’s diversity of communications. Dza Paltrül was one of the most revered Lamas in Tibet in the nineteenth century. He was a practitioner of Longchen Nying-thig, the heart essence teachings of Longchenpa, and one of the major holders of the oral lineage of teachings such as Yeshé Lama and Tsa-lung. The Nying-thig line originated with Kun-khyen Rabjam Longchenpa, who appeared in visionary form and revealed it in direct transmission to Jig’mèd Lingpa. Jig’mèd Lingpa passed the transmission to Jig’mèd Gyalwé Nyügu,who in turn passed it to Dza Paltrül.

The Drüpchen Gyalwa Changchub said that most people would have problems recognising Paltrül due to his non-conformity, his aversion to institutions, and his beggarly appearance. Dza Paltrül’s lifestyle was not particularly unconventional for a ngak-’phang togden; but for a Lama of his lineal status it was somewhat extraordinary. He was influenced in assuming this lifestyle by the example of Shabkar, whom he was never able to meet, and by one of his most important teachers – DoKhyentsé Yeshé Dorje. He lived for protracted periods of his life traversing the mountains, sleeping rough, and having practically no possessions. He did not wear a white skirt, or even the costume of a ‘village ngakpa’ so he went unrecognised – dressed in nomad’s clothes, and what Ngak’chang Rinpoche describes as ‘the sheepskin coat of a high plains drifter’. He wandered from place to place, mainly in the valleys of Dza-chukha, Dzi-kha, Do, Mar, and Sér, teaching through haphazard contact with people. In this way he manifested secret activity for the benefit of everyone who came in contact with him. According to Dzogchen ‘secret activity’ is a method of teaching which is extraordinarily powerful, but extraordinarily inaccessible in terms of meeting with it. Those who can be benefited by such teachings, are only those who are completely ripe in the moment it manifests. Dza Paltrül was often taken to be an itinerant vagabond, lacking even the air of religious mendicancy that would prompt dispensation of alms.