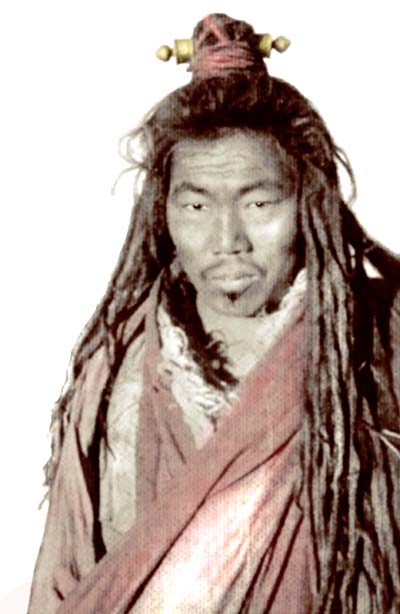 This old hand-coloured photograph comes from Ngak’chang Rinpoche and Khandro Déchen’s private collection of photographs of the gö-kar chang-lo’i dé. This picture of Ngakpa Seng-gé Dorje is typical of many photographs taken during the early 20th Century. It has been hand-coloured probably by a student or relative of the ngakpa. Ngakpa Seng-gé Dorje was a disciple of Ngala Shérab Dorje Rinpoche a gö-kar chang-lo Lama from Golok. His robe waistcoat is made of sheepskin, which was typical of the nomad ngakpas and ngakmas. The takdröl worn in his hair is unlikely to be made of gold – but it is a fine example of the type of takdröl commonly worn by the gö-kar chang-lo’i dé. Unfortunately not much is known about Ngakpa Seng-gé Dorje, apart from that he was married with nine children. The name of his wife was A’dzom Pema, and she was also a gö-kar chang-lo practitioner. No photo is available of her or their children – although they were said to live amongst the nomads for whom they performed rites. This photograph was given to Ngak’chang Rinpoche by Khamtrül Yeshé Dorje Rinpoche in 1974.

Ngak’chang Rinpoche comments:
When I first went to the Himalayas in the early 1970s – I studied with Khamtrül Yeshé Dorje Rinpoche, and it was through his inspiration that I went to seek out His Holiness Düd’jom Rinpoche and His Holiness Dilgo Khyentsé Rinpoche. Meeting these wonderful ngakpas changed my life and eventually led me to my Root Lama and Heart masters – Kyabjé Künzang Dorje Rinpoche and Jomo Sam’phel. Not long after I met Khamtrül Yeshé Dorje Rinpoche, I began to collect photographs of ngak’phang practitioners and ngak’phang Lamas in order that I could one day present them in some form. Khamtrül Yeshé Dorje Rinpoche very kindly gave me several excellent photographs and told me a little about the Lamas and practitioners thus portrayed. I have always found these photographs immensely encouraging – so much so that they inspired me to serve the tradition of the gö-kar chang-lo’i dé also called the lineage of rig’dzins (vidyadharas), the gendün karpo (dGe bDun dKar po – white sangha), and the ngak’phang or mantra-hurling tradition. I was greatly encouraged in this work by His Holiness Düd’jom Rinpoche in 1976 – who told me that I should commit myself to establishing the gö-kar chang-lo’i dé in the west. He told me that it was good that I collected these photographs but that there was more I could do – I could work to ensure that the gö-kar chang-lo’itself was preserved and propagated in the west. I have dedicated my life to this end from that day on.