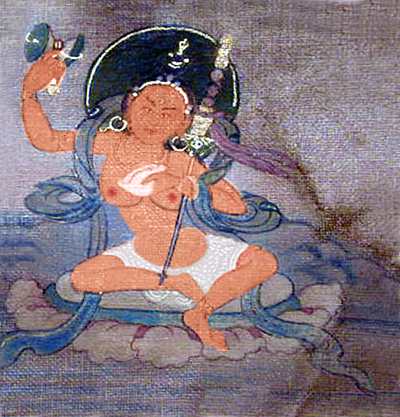 When seeking for Niguma, Khyungpo Naljor was told that she could be found—if one were sufficiently dauntless—with her entourage within the great charnel ground of Kosa Ling. Merely on hearing the name, Niguma caused Khenpo Naljor to weep and his hair to stand on end. He departed for the charnel ground of Kosa Ling immediately. As soon as he had ventured into the charnel ground Niguma appeared in the sky in front of him, dancing in bone ornaments, holding a skull-bowl and brandishing a gri-gug. As soon as Khyungpo beheld her, he knew she was Niguma. He asked for the oral instructions – but Niguma screamed: Are you sure! Do you not know that I am a cannibal! Do you not know that I am a flesh-eating dakini! If you do not know then maybe … you had better run for your life! As soon as my retinue arrives we will certainly devour you!

Khyungpo Naljor simply offered prostrations and begged once more for secret oral instructions – but Niguma replied: Ha! I think all you really want is Mahayana, you poor little fellow! But for that you will need gold! Isn’t that the case! So Khyungpo offered Niguma five hundred ounces of gold – but Niguma just snatched the gold and hurled it into the sky. On witnessing this, Khyungpo Naljor realised that Niguma was not interested in gold at all and that she must indeed be a flesh-eating dakini. As soon as this thought arose in his mind, Niguma’s eyes flashed in all directions. At every point-instant of her gaze her entire retinue of khandros and pawos sparkled out of the sky as the kyil’khor of the empowerment – and Niguma gave Khyungpo Naljor transmission of her six yogas.

Ngak’chang Rinpoche comments:
People tend to think that this kind of experience belongs to ancient India or Tibet, or that these accounts are symbolic. Neither are the case. This kind of experience is available anywhere and at any time for anyone with the same devotion as Khyungpo Naljor. As to symbolism … everything appears symbolic to those who do not receive transmission – but whether the dakini wears cemetery ornaments or whether she wears an endangered species fur coat depends on the potential obstacles of the person who wishes for secret oral instruction. There are Lamas such as Kyabjé Künzang Dorje Rinpoche and Jomo Sam’phel with whom anything can happen. There are Lamas such as Dung-sé Thrin-lé Norbu Rinpoche with whom anything can happen. If one expects a colourful ritualistic spectacle – one might miss the whole point. What might occur may be too subtle or too overt – or the context might be simply incomprehensible from the point of view of spiritualised expectations.

Khandro Déchen continues:
I am always slightly aghast at what people miss with such Lamas – it is as if they are being offered money and yet they demand instead for something they can spend.