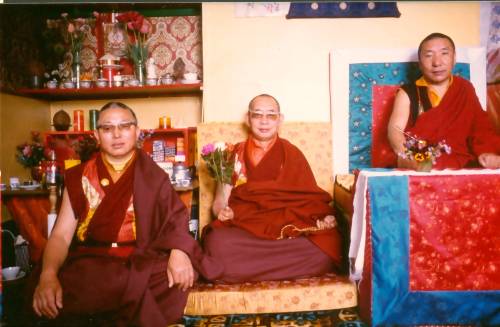 After completing her degree course in multi-disciplinary design, Ngala Nor’dzin took a one year post graduate certificate in education at Birmingham Polytechnic. By this time she was a committed Vajrayana practitioner and was delighted to find a centre in Birmingham that she could visit to join in practise with other practitioners. Karma Ling is a Karma Kagyüd centre. Ngala Nor’dzin was also pleased to attend a Kagyüd centre as her friend and mentor Tsültrim Zangmo was ordained into the Kagyüd Lineage by HH the 16th Gyalwa Karmapa, and Ngak’chang Rinpoche himself had received many teaching and empowerments from Lamas of the Kagyüd School.

Ngala Nor’dzin comments:
The atmosphere of the centre was less formal in some ways than I was used to at Lam Rim, and it seemed quite usual for Tantric Empowerment to be being offered, whereas empowerment was a rare occurrence at Lam Rim. Khenpo Rinpoche gave empowerment into the practice of Green Tara. During the year that I was in Birmingham, I also completed a ten day Lhatong retreat, which was extremely helpful for developing the self discipline needed for the long-term commitment of ‘The Four Naljors Ngöndro’ Dzogchen sem-dé practice in the Aro gTér Lineage.

Ngala ’ö-Dzin comments:
I was brought up in a Catholic family. If we were away from home for any reason, my father would always expect us to find out the location of the nearest Catholic church while we were away, so that we could attend mass. Although there is not such a similar network for Buddhist practitioners, it can be useful to visit other centres and engage in practice within other traditions. To hear teachings from a differing stylistic perspective and with a different emphasis deepens one’s understanding.