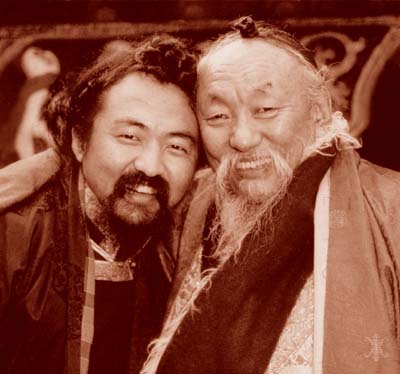 incarnation of Tséwang Norbu – son of the first Chog-gyür Lingpa

Jig’mèd Trom-gé Rinpoche is the son of Chag’düd Trülku. He is a ngakpa and the incarnation of Tséwang Norbu – son of the first Chog-gyür Lingpa. He began studying at the age of six at Chogling Gompa under the tutelage of Trülku Ögyen Tobgyal Rinpoche. With the scholarly Khétsun Sangpo Rinpoche he delved deeply into Paltrül Rinpoche’s ‘Künzang Lama’i Zhalung’ – ‘Word Transmission of the Primordial Lama’ (published in English as ‘Words of my Perfect Teacher’). As well he received teachings and empowerments from His Holiness Düd’jom Rinpoche and His Holiness Dilgo Khyentsé Rinpoche, HH Jig’mèd Phüntsog Rinpoche, HH DoDrüpchen Rinpoche, HE Trulshik Rinpoche, HE Tulku Ögyen Rinpoche, HE Chag’düd Rinpoche, and Nyoshul Khen Rinpoche. Jig’mèd Trom-gé Rinpoche says of Nyoshul Khen Rinpoche:
I didn’t receive so many teachings from Nyoshul Khen Rinpoche, but from the time I was very young, whenever I saw him it gave me something. I didn’t know how to label it then, but later, when I had completed some retreat and practice, I could feel it as a shift in my meditation. In India, I used to visit him every day and felt strong comfort from him.

HE Chag’düd Trülku Rinpoche had many dreams in connection with the birth of Trülku Jig’mèd:
Before his conception I had a dream of an Indian sadhu, a wandering yogi, approaching and handing me a small Tibetan-style book. He spoke to me in Tibetan saying, ‘You should keep this.’ Opening the book, I saw that the first half appeared to be written in Sanskrit, and the second half was a Tibetan translation of the Sanskrit. Later, during Karma’s pregnancy, she and I had a dream on the same night of this Indian sadhu. In my dream, he held in his hands a sacred water bowl and sprinkled water throughout our house. In Karma’s dream, he offered her a mirror and arrow, sliding the arrow underneath her blouse toward her chest. On the actual night of Jig’mèd’s conception in Orissa I had a lucid dream of a young Sikh man coming into our tent.

Just before Jig’mèd’s birth, I dreamed of a warrior in full regalia – armour, a helmet and a sword, carrying a shield and a bow and arrow – who appeared to be Gésar, the eleventh-century dharma king. He said, ‘This is your son,’ and by this I understood that in some transcendent sense he had conferred a child on me. Our son was born on the tenth day of the eleventh month of the Dragon Year.

My fullest, most auspicious dream occurred when Jig’mèd was a young boy. In that dream I went to Zangdok Palri, Glorious Copper Coloured Mountain, the pure land of Padmasambhava, to take part in a great offering ceremony and to ask Padmasambhava who my son was. However, upon arrival I didn’t have the audacity to enter Padmasambhava’s presence, so I began circumambulating his celestial palace along with a great gathering of realization holders and dakinis. Suddenly I came across my mother. She had a very white complexion and a bluish tinge. She laughed when she saw me and before I could speak she said, ‘Your son is Yudra Nyingpo.’ Yudra Nyingpo was one of the twenty-five close disciples who is renowned as a siddha, a translator and a master of Great Perfection. Karma and I rejoiced in the birth of this son.