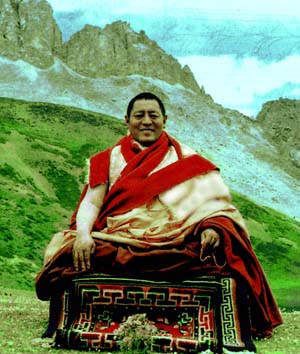 Khenpo Jig’mèd Phüntsog Rinpoche (mKhen po ’jigs ’med phun tshogs rin po che) is the incarnation of gTértön Sonam Gyaltsen (gTer sTon bSod nams rGyal tsen). gTértön Sonam Gyaltsen was a close friend and teacher of the 13th Dala’i Lama. Khenpo Jig’mèd Phüntsog Rinpoche was born on the third day of the first month of the water bird year of the 16th Rabjung, 1937. He was born in Golok near Ga-zé. His eyes were open the moment he was born. His father’s name was Pé-ti Dorje, and he belonged to the same lineage as Traktung Düd’jom Lingpa. Dodrüp Tenpa’i Nyima was his father’s uncle. His mother’s name was Yudrog, and her lineage could be traced back through an unbroken succession of Lamas. His parents were ngak’phang practitioners who lived the life of nomads. Among the thirteen Lamas in his mother’s lineage, were Jinpa Gyatso Rinpoche, Lödrö Gyatso Rinpoche, Jig’mèd Rinpoche, and Könchog Rinpoche (the latter being his maternal uncle). They were all related to the famous Nubsur line which is a branch of the Nyingma lineage of Palyul. (Palyul was founded by Künzang Shérab Rinpoche, and Lödrö Gyatso Rinpoche was one of his direct disciples). Jig’mèd Rinpoche was a phurba master who could make his phurba fly. His phurba was of the type which resembles a spear. Pema Gyaltsen Rinpoche was prophesied by Düd’jom Lingpa as a real incarnation of Ögyen Tokyo Dorje. He practised both the Dzogchen and the Kagyüd ‘Formless Mahamudra’, because he was a disciple of both and then taught his own disciples this combined teaching. This line of disciples still exists.

When Khenpo Jig’mèd Phüntsog was young, memories of his previous life, concerning events, places and his character, were all fresh in his mind. He clearly remembered receiving teachings from Ögyen Shabka, Jamgön Kongtrül, and others. When he was six he found a leaf of paper protruding from a chörten. He took it out and showed it to his Lama, who saw that it contained the drüpthab of Ögyen Jampalyang. It then occurred to him that there were Treasures to be revealed and he extracted various statues and shells while he was playing. These can still be seen today. His uncle, Lama Pema Norbu, was his first Lama when he entered the Nubsur. At the age of eight he received from his uncle the Nyingma instructions unique to the Palyul Lineage. They consist of three practices, each of which is undertaken in solitary retreat. The first month consists of ngöndro. The second month is a rTsa rLung practice. The third is Dzogchen. Up to the age of 15 he studied Dzogchen. He could interpret dreams, manifest in different bodies, and visit other dimensions. At a place called Gönlung Bumpa he revealed gTérmas on several occasions. Once a young girl came to him and said, Because we are linked by our past prayers you should take me as your consort. However, the opportunity was missed and he was unable to take her as his consort at that time. When he was 26 he founded a retreat centre, Seng-gé Yangtsung in Amdo. In Lho Drak he stepped on a large boulder, leaving his footprint in it, and the imprint is still visible. In the same place he scaled a cliff and found a statue of Padmasambhava and three ancient conches. At Ba-shap Dakar he found a ‘cloud jewel’ and again impressed his footprint on a stone, within which the syllables Om, A’a:, and Hung can be seen.