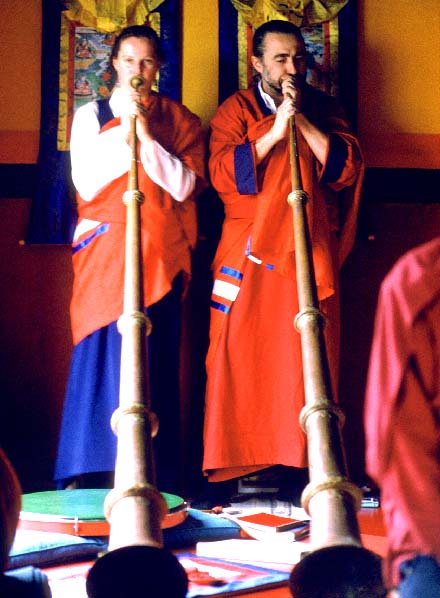 Dungchen, literally the great horn of the Tibetan Tantric orchestra, come in various lengths up to 15 feet long. They are typically constructed in telescoping sections to simplify travel and storage. The dungchen are always played at least two at a time; sometimes three are used so that two may always be sounding while the third player takes a breath. Ngakpa ’&ouml-Dzin Tridral says:
The dungchen always appear in pairs as their low, roaring call is supposed to resemble the sound of dragons mating.

Dungchen often appear as part of the orchestra in particularly energetic or wrathful yogic song, for example the accompaniment to phurba garcham (phurba yogic dance). Players blow loosely into a mouthpiece something like a tuba, as Ralzhig says, fluttering wetly like a horse.

Naljorpa Ögyen Dorje says of playing the dungchen:
I have never had any formal training, but this is the best way I’ve found to get a long, consistent tone. First, the mouthpiece needs to be wet. Next, I pucker my lips and place the top lip gently against the inside top of the mouthpiece (one may need to get one’s moustache out of the way), allowing the lower lip to flutter in the remaining space. This puts the outside rim of the mouthpiece right up under my nose. I hold the mouthpiece like a trombone player, pressing it directly against my lips with the index and second fingers on either side, and the thumb underneath. This is the only way I can get a good steady but light pressure and produce a long consistent note. And though a deep tone is desirable, there has to be a balance between overly-loose flapping lips that let too much breath through too quickly, and tight lips that will only produce a comical higher note.