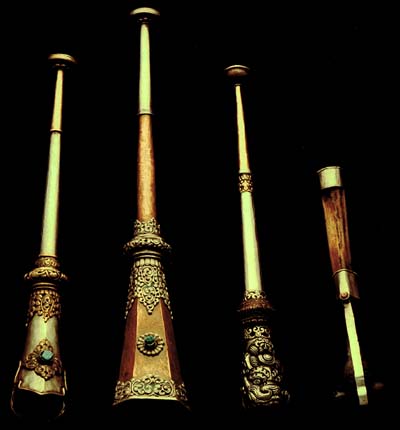 This photograph was taken in McCleod Ganj in 1975 by Ngak’chang Rinpoche, and shows the kanglings in use around Khamtrül Yeshé Dorje in his gompa.

Ngak’chang Rinpoche recalls:
The kangling at the end on the right was given to me by Khandro Ten’dzin Drölkar. This is the only kangling in this set that was human bone. All the others are of the monastic style with no thigh bone. They were used by the three monks who came to Lama Yeshé Dorje’s gompa for a big Tröma Ngakmo Tsog Khorlo at the festival of Lha Bab Düchen.

The monastic kanglings are quite elaborate and decorative in contrast to the simplicity of the thigh bone kangling. Ngak’chang Rinpoche comments:
All ritual objects are made as nicely as possible and where appropriate are of intricate design and often highly decorative. The human thigh bone kangling is the most undecorated of these kanglings out of respect for the fact that it is human bone – it was once part of someone’s body. The use of a thigh bone as an instrument is directly communicative and requires no elaboration.