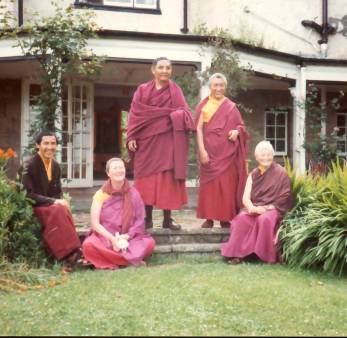 The Mind and its Functions

Geshé Tekchog was always most warm and encouraging towards us, comments Ngala Nor’dzin. He was exceptionally down to earth and seemed to have a keen understanding of Western life.

This photograph was taken after a weekend retreat at Lam Rim on ‘The Mind and its Functions’ in 1982. On the left are Samten, a monk who attended Geshé Tekchog, and a Western nun whom we simply knew as ‘Margot’. To the right of Geshé Tekchog and Geshé Damchö is Tsultrim Zangmo. Tsultrim Zangmo was an important person in Ngala Nor’dzin’s life.

Ngala Nor’dzin comments:
I still miss Tsultrim. We spent quite a lot of time together as I used to help her run stalls at various ‘alternative’ shows around Britain. She was someone I was able to ask questions of in a relaxed informal way, and receive answers that were both practical and inspiring.

Ngala ’ö-Dzin said:
Tsultrim rarely taught at Lam Rim, which was a shame as she had a wealth of knowledge to offer. Ngak’chang Rinpoche was a good friend of Tsultrim Zangmo and was always encouraging her to teach. Ngak’chang Rinpoche knew her from the time when she lived in Bromley where he visited with her whenever he was in London. I remember them having lively conversation and laughing a great deal. Ngak’chang Rinpoche invited her to Cardiff on one occasion and asked her to give teachings in the shrine room in Roath. She talked on the subject of refuge for a while, but it was not long before the teaching became a conversation with Ngak’chang Rinpoche in which we learned a wide variety of interesting things. Ngak’chang Rinpoche always respected her wealth of experience from having lived in India in the early days of the Tibetan refugee settlements. Although the last decades of her life were spent in a Gélug environment, Tsultrim Zangmo—who had been ordained by the 16th Gyalwa Karmapa—maintained all her Karma Kagyüd practices, and received Dzogchen transmission from Ngak’chang Rinpoche. She led practice quite often at Lam Rim and had a fine clear singing voice.