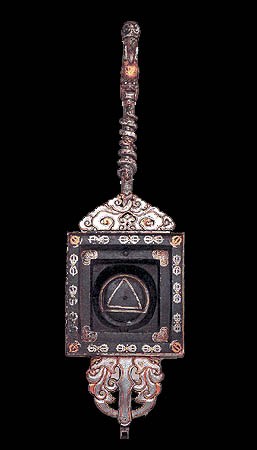 for the fire offering ceremony

This Tibetan Buddhist implement is a ladle that would be used to pour melted butter or oil during a fire ceremony as an offering. It would be part of a pair – the second implement representing a mandala, and being of similar size and shape, but flat without the depth that makes this a ladle. The oil or melted butter would be poured from the ladle over the mandala and into the fire. The mandala symbolises all phenomena, which is being offered.

In the Aro tradition, fire ceremonies occur after ordination and to burn namkha. At the end of the ordination ceremony, the Lineage Lamas symbolically stab the clothes which the newly ordained practitioner wore in their pre-ordination retreat. This is to signify the death of their former self and rebirth as a gö-kar chang-lo practitioner. These clothes are then burned in a fire ceremony a day or two later. At that time, those who have attended the ordination retreat may throw slips of paper into the fire with wishes for health, happiness and resolution of difficulties written on them.

Namkha are woven thread crosses, representing the elements. A namkha may be woven to improve a problematic situation, help someone who is ill, or enrich an environment through the symbolic manipulation of the elements as represented in the namkha. They may be made singly for a particular purpose at any time, or a series of them may be made during a solitary or group retreat. Namkha may then be kept for a year and burned, or burned at the end of the retreat, to affectuate the intention of their weaving. Traditionally namkha were often made at Losar—Tibetan New Year—and burned the following Losar.