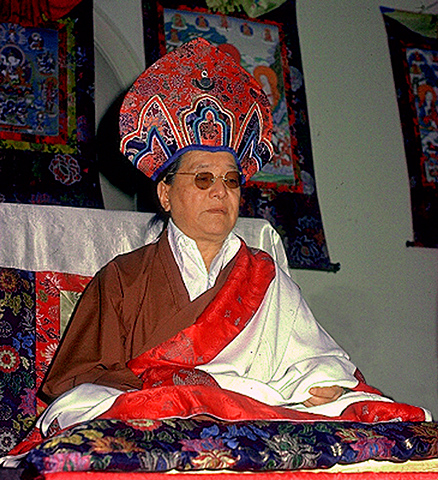 Kyabjé Düd’jom Rinpoche was a ngak’phang Lama, and the incarnation of Düd’jom Lingpa. He became the head of the Nyingma tradition of Tibetan Buddhism after the exodus from Tibet. He was a poet, artist, musician, sculptor, and the author of many books. He was a gTértön (visionary discoverer of hidden teachings), and historian (see his two volume History and Fundamentals of the Nyingma). He was a meditation master and ngak’chang Lama with the most profound yogic accomplishments.

In this photograph he wears his hair in the phodka ling-ngé (phod ka ling nge) – yogic ‘flowing hair’ style. He wears the robes of an ordained ngak’phang practitioner of the gö kar chang-lo’i dé (gos dKar lCang lo’i sDe), the ‘white sangha’ of Vajrayana practitioners. He is the teacher of most Nyingma Lamas alive today and held in the most profound respect by all Vajrayana practitioners. He was the father of Dung-sé Thrin-lé Norbu Rinpoche who is now a holder of the Düd’jom gTér lineage.