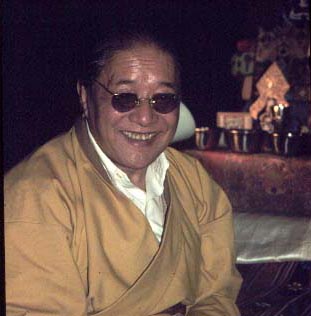 Great Grandfather of the Ngak’phang Sangha

After his interview, Ngak’chang Rinpoche returned to Cardiff where he fortuitously was invited to give talks at the Buddhist groups in Bath, Bristol, and Cardiff. These invitations arose from a few of his former art college lecturers who were interested both in Buddhism and in Rinpoche’s experiences in the Himalayas. It was at that time that the first Western people began to approach him with regard to becoming his students. Soon after this he was invited to teach at the Lam Rim Buddhist Centre in Raglan, Wales. Amongst those who attended this teaching was Khandro Déchen, and his first two apprentices: the couple who eventually took ngak’phang ordination as Ngala Nor’dzin & Ngala ’ö-Dzin.

Kyabjé Düd’jom Rinpoche was extraordinarily kind and enthusiastic in encouraging Ngak’chang Rinpoche, and Ngak’chang Rinpoche continually refers to him as being the protector of the gö-kar-chang-lo’i dé – the non-celibate ordained tradition of the Nyingma school.

Ngak’chang Rinpoche has said:
Without the direct inspiration of Kyabjé Düd’jom Rinpoche, I would have lost heart with the task of establishing the ngak’phang sangha in the West. Every time that obstacles arise I remember His Holiness’ radiant smile and I become incapable of dejection. The energy of his encouraging words seems utterly unending.