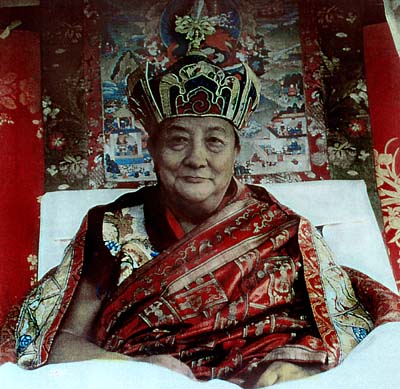 Khandro Déchen says of the Crown of Ögyen:
The Ögyen Pèd-zha symbolises the lotus-born quality of the enlightened state – which arises ‘self-manifested’. Just as a lotus arises from mire—and shows no signs of the mire on its pristine petals—so too does the non-dual state arise from the illusory mire of duality.

Dilgo Khyentsé Rinpoche usually appeared in simple dress, and he is remembered for his enlightened simplicity in every aspect of his presence – apart from the complexity and vastness of his knowledge. Like all Lamas , Kyabjé Dilgo Khyentsé Rinpoche stressed the importance of the vajra master, devotion to the Tsawa’i Lama, and the practice of Lama’i Naljor.

Ngak’chang Rinpoche has stressed the importance of the vajra master in his teachings since 1976 when he first responded to interest in Vajrayana in the West. One of the first impressions he gained of Western interest in Vajrayana was that the sense of the fundamental centrality of the vajra master was lacking. With the inspiration of Kyabjé Dilgo Khyentsé Rinpoche, Kyabjé Düd’jom Rinpoche, Kyabjé Künzang Dorje Rinpoche and Jomo Sam’phel, and his other Tsawa’i Lamas (as well as every other Vajrayana master with whom he has studied and taken transmission) he, along with Khandro Déchen, has worked strenuously to establish a sense of the fact that without the vajra master there is no Vajrayana.

My meetings with him were a profound influence on me in terms of his sheer brilliance and luminescence – but what stayed with me always has been his emphasis on kindness and his utter rejection of all dharma politics. But more than this was his love of his own vajra master. Kyabjé Dilgo Khyentsé Rinpoche’s utter uncompromising devotion for his Tsawa’i Lama illuminated everything he said and everything he did. This was the inspiration he imparted to everyone who came to him, and in many ways was the greatest teaching I received from him.

Kyabjé Dilgo Khyentsé Rinpoche always stressed the primacy of the relationship with one’s vajra master – and told his students repeatedly that realisation was not possible through the Sutrayana without reverence and trust in the Spiritual Friend – or, in Vajrayana, without devotion and utter reliance on the Lama. This is the most important message Khandro Déchen and I have for Western people. It is the message of Kyabjé Dilgo Khyentsé Rinpoche, every Dzogchen master, and every Lama of every school of Tibetan Buddhism.