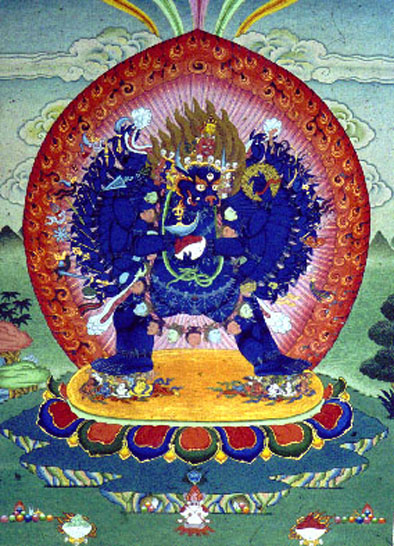 The Indestructible Destroyer of the Lord of Death

Dorje Shin-je-shèd (rDo rJe gShin rJe gshed) is the one who destroys the concept of death as being ‘separate from birth’. Dorje Shin-je-shèd is the dark blue colour of space and wields the entire assemblage of vajra weapons in his thirty-two arms. His main face is that of a blue yak, surmounted by a red wrathful face, surmounted again by the yellow face of Jampalyang (Manjushri). This describes the manner in which the concept of death is overthrown by the wrathful intelligence of Jampalyang. Dorje Shin-je-shèd exemplifies the knowledge that death and birth are inseparably linked. Dorje Shin-je-shèd is shown here in the form of Pawo Chigpa (dPa bo gCig pa) – the Gélug form called ‘Solitary Hero’. In the Nyingma tradition he is more commonly depicted in his yab-yum manifestation.