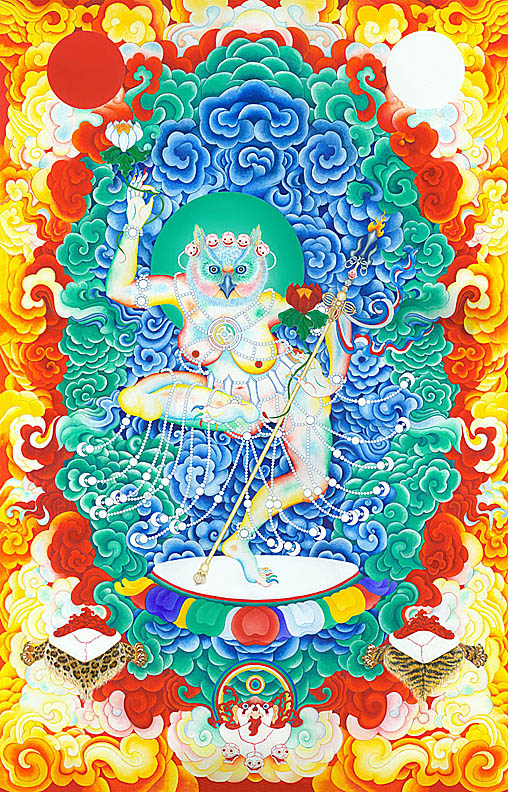 ’ug gDongma is the mysterious æthereal apparitional owl-headed dakini: the nocturnal mistress who inhabits the dark, as a luminous spectre of indiscernible unease; in which dualistic bewilderment dissolves. Within the dimension of her inscrutable darkness, monism, dualism, nihilism, and eternalism fail of their own inability to represent reality.

Her white plumage is the radiant rainbow-window on the nine skies. All colours manifest within the whiteness of her plumage as rainbows are reflected in pearl. She wears the five-skull crown displaying her power to transform conflicting emotions into the spectral wisdoms of chö-ku. Her mercurial visage reflects the infinite variety of the colours of dusk which transform every nuance of variance from veracity.

Her cheerful screech dispels arrogance. Her piercing gaze dispels puritanism. She wears the six pearl ornaments, in display of her mastery of the six vehicles of Vajrayana. The chest ornament is composed of two circular yungdrungs. The outer yungdrung is the joyous female manifestation of the four Buddha karmas and the inner yung-drung is the joyous male manifestation of the four Buddha karmas.

She wears mother-of-pearl yogini’s earrings as the indecipherable indication that she surreptitiously rids beings of the demon of dualistic contrivance. She cradles an ivory khatvanga in the crook of her left arm. In her right hand she holds the white lotus of dream awareness – and in her left she holds the red lotus of the nang-wa bardo.

She swoops through existence and non-existence in token of her effervescent kindness, and of her ambiguous ability to initiate self-accomplished wisdom for everyone and everything everywhere.