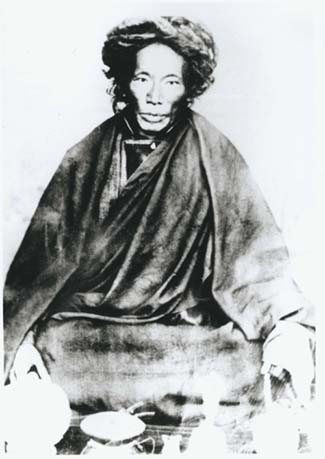 Lérab Lingpa was an incarnation of Dorje Düd’jom – one of the twenty-five disciples of Padmasambhava. Tsarung Na-nam Dorje Dud’jom (tsa rung sNa nam rDo rJe bDud ’joms) was born into the Clan of Tsarung, and was a member of Trisong Dé-tsen’s Court. After practising for years in a light-less cave he gained the siddhi of passing through mountains unhindered by their physical mass. He received the drübthabs of Jigten Chod-tö (’jig rTen mChod bsTod) and Dorje Phurba (rDo rJe phur ba) from Padmasambhava and lived mostly on the mountain of Hé-po Ri (has po ri) near Sam-yé – one of the sacred mountains of Tibet. He gained the siddhi of flight in later life, and took residence in Tsarung at an almost inaccessible place called ‘Bird’s Nesting Place’ (bya tsang – Ja-tsang) where he continued to translate Vajrayana texts. His incarnation was Jamyang Khyentsé Wangpo.

Lérab Lingpa was born in the Nyag valley of Kham. He was born to a ngak’phang nomads family. When he was thirty years old he had a vision of dakini cypher in the sights of his rifle. He was upset when others killed animals – because they had no capacity to liberate them as he did, through dispatching them with his rifle. In recognition of this he gave up hunting in order that people would not emulate him purely at the outer level. He had little education and was barely literate – but he was recognised by many as a great master. He was a disciple of Jamyang Khyentsé Wangpo (’jam dByangs mKhyen brTse’i dBang po 1820-1892) and ’Ju Mi’pham Namgyal (’ju mi ’pham rNam rGyal 1846-1912). He was both a friend and disciple of Thubten Gyatso, the Thirteenth Dala’i Lama, and of Jig’mèd Tenpé Nyima the third Dodrüpchen (’jigs ’med bsTan pa’i nyi ma – 1865-1926).