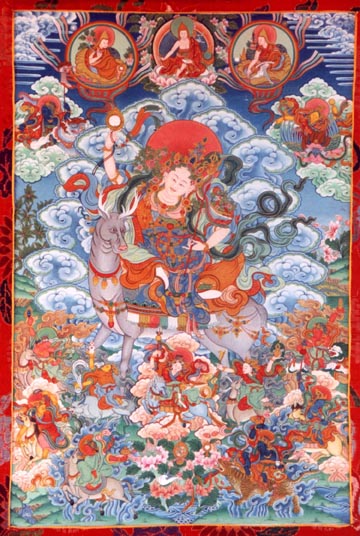 Tséringma is the lady who protects ones longevity in terms of non-dual awareness. She is one of five sisters who once inhabited mountain peaks above glacial lakes along the southern border of Tibet. She and her sisters each have a special blessing power: long-life, wealth, magical ability, nutrition, and fortuity. The Second Buddha – Padmasambhava – subdued the five sisters and oath-bound them to the teachings as protectors. They travelled to India and received further instruction in the charnel ground called ‘Dark Noise’. They received instructions from Lopön Chog-gyi Göcha and Mahasiddha Khana. Later, the five sisters encountered Milarépa and tested him through psychological assault to discover if he was a true practitioner. They were unable to harm him – due to both their vows to Padmasambhava and the profound realisation of Milarépa. After offering his body to them, the five sisters were convinced that Milarépa was a genuine siddha. Finally he gave them instruction on Kya’i Dorje Gyüd and Lé-kyi Chagya. He then took Tséringma as his consort.

This is elaborate and clearly demonstrates the active qualities of Tséringma. She holds the yeshé mélong – wisdom mirror – in her right hand which transmits the clear nature of Mind. In her right hand she holds the vajra pike (a gri-gug blade mounted affixed to a shaft) for laying waste to the hard shell of emotional indifference which obstructs the natural awareness of sentient beings.