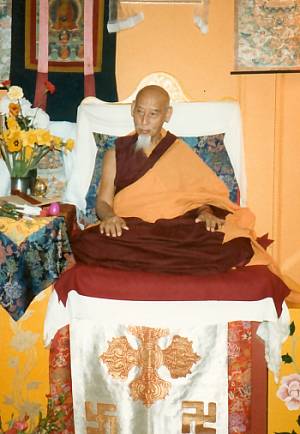 Ngala Nor’dzin Pamo comments:
At that time I was a relatively young practitioner, and I found it a daunting experience to be in the presence of His Holiness Song Rinpoche. My impression of him was of a Lama of great honour and integrity. He did not say a great deal, but keenly observed all that was going on about him. He did not laugh readily or appear overtly playful, yet there was often the hint of amusement and enjoyment in his face.

Ngala ’ö-Dzin Tridral continues:
His Holiness Song Rinpoche stressed the need to continue to practice even when we came up against obstacles, and that we should continually review our progress. He stated that a happy, luxurious life was like a good dream, and that obstacles and difficulties were like a bad dream. We should give them no significance, but simply carry on working towards real, everlasting happiness.

HH Song Rinpoche was born in Mang-sang, Kham, Eastern Tibet in 1904. He went to Lhasa when he was eleven years old to study at Shar-tsé where he became renowned as irrefutable in debate. After graduating as a Lharampa Geshé at the age of twenty-five he moved to the Gyütö Tantric College (with which Ngak’chang Rinpoche had connection after receiving Vajrabhairava empowerment from Song Rinpoche). Song Rinpoche was a regarded as an extremely strong and wrathful Lama by many.

Ngak’chang Rinpoche—who remembers him as being extremely kindly and gentle—commented:
I was always deeply impressed by Kyabjé Song Rinpoche’s deep kindness and tolerance. He was devoid of all sectarianism – as evidenced by his generous and affectionate treatment of a young western Nyingma ngakpa. He showed great delight at my large gÇod damaru and promised to give me teachings on gÇod when I next saw him. Sadly he passed away before this was possible – but his encouragement with practice always remains with me. Song Rinpoche told me that the empowerment of Vajrabhairava I had received from him was seamless with the Nyingma practices and that I could practise either and maintain my vows perfectly. I was later able to be of help to Ngala Nor’dzin Pamo through this means and through the practices she had received.

Song Rinpoche was impeccable in his knowledge of Vajrayana art and ritual, and was famous for his powerful magical activities through wrathful practice. From 1946 to 1959 Song Rinpoche travelled between Gompas in Tibet, removing hindrances, performing Vajrayana rites, and giving empowerments. At Gaden, Déchen, Maldo, Chhé-kka, and Zibug – and many other areas – he converted powerful local spirits who had malignantly infested both livestock and human inhabitants. His power to draw on or cut off rain, and his power to prevent hailstorms was known to many.

Ngak’chang Rinpoche comments:
Song Rinpoche once made a frog from clay filled with mantras on tiny paper rolls. He had authenticated it through wrathful rites, and whenever hailstorms seemed imminent the frog moved and looked in the direction of the hailstorms. This infallibly prevented hail in the fields of the village where the frog was kept. I asked Kyabjé Song Rinpoche about this frog and he laughed long and loud. He looked at me with a twinkle in his eye and said ‘I think you like frogs. They are good luck to you. I see this.’ I have always remembered that – it was a strange and delightful moment.

He was appointed as principal at the Institute of Higher Tibetan Studies at Varanasi, but after his office was completed, he moved to Shar-tsé which had been re-established in Mundgod, South India.

HH Song Rinpoche first came to teach in the West in 1978, at the request of Lama Yeshé. Thousands of Westerners received teachings from him, both in the West and in India.

HH Song Rinpoche attained parinirvana on Thursday the 15th of November 1984, at his Gompa of Shar-tsé. His last function at Shar-tsé was to preside over the verification of the reincarnation of his Lama, HH Tri’chang Rinpoche. Soon afterwards he passed away – without warning and displaying no signs of illness. It was discovered later that HH Song Rinpoche had noted the exact date and time of his death in his diary weeks prior to his death. He was cremated on the 19th of November and relics were discovered in his chörten six days later. His skull was found undamaged by fire and intact among his cremation ashes. Between the two hollow metal dishes of the cremation hearth many relic pills were discovered.

HH Song Rinpoche’s current incarnation was born in the Kulu Valley of Himachal Pradesh in the Himalayan foothills of Northern India and enthroned at Shar-tsé monastery.