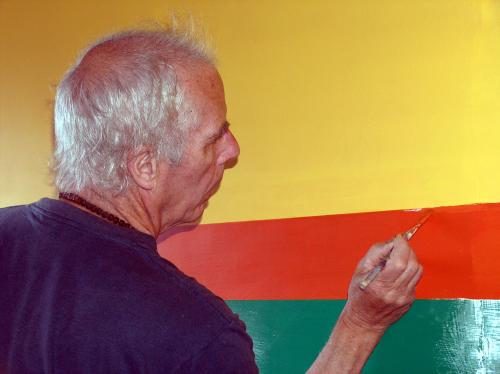 The major project for the craft retreat week in June 2004 with Ngala Nor’dzin and Ngala ’ö-Dzin, was the creation of a Khyungchen Aro Lingma appliqué. The secondary aim was to redecorate the shrine room at their home, Aro Khalding Tsang. It was also intended to end the nine day retreat with the ascent of the mountain, ‘Cadair Idris’.

The first task of repainting the shrine room was carefully removing all the thangkas and statues and practice equipment. This could not commence until Sunday afternoon, as on the first Sunday morning of the retreat we were to be joined by other practitioners for the regular monthly meeting of the Cardiff Vajrayana Meditation Group. Ngala Nor’dzin led the practice of yogic song and meditation, and gave a teaching on the Four Naljors of Dzogchen Sem-dé. Every evening the shrine room was cleared sufficiently after the painting and refurbishment work during the day, so that mornings could begin with practice.

On Monday the picture rail was replaced and extended so that it went all round the room. We painted the picture rail gold, a task that had not been completed when the shrine room was first created in the largest bedroom of Ngala Nor’dzin and Ngala ’ö-Dzin’s home. It was astonishing how this small detailed effected the overall finish of the room. It added a richness to the atmosphere of the shrine room.