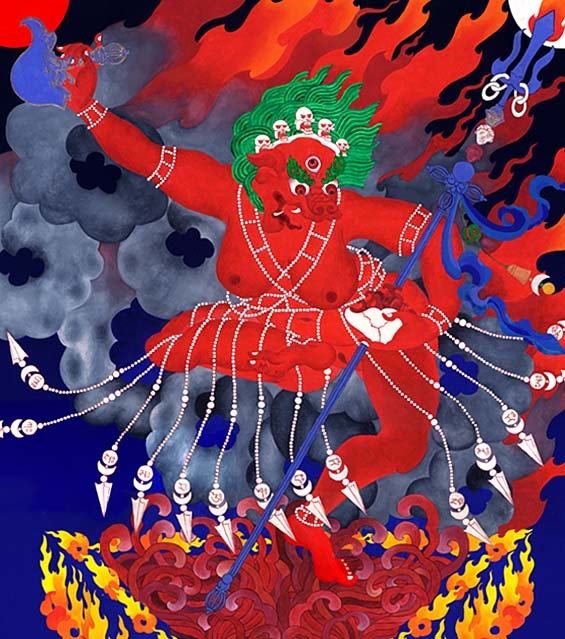 the lapis lazuli khatvangha trident which menaces all dualistic dalliances

This thangka was painted by Khandro Déchen, in the style evolved during the last decades of the 20th century. This style is based primarily on the Karma Gadri School, but places yet further emphasis on simplicity and sparseness. The colours employed are exactly those specified in the drüpthab of Red Seng-gé Dongma – rather than the more pastel effect of traditional Tibetan thangka paintings.

In this close-up we can see the manner in which Red Seng-gé Dongma clutches ‘the lapis lazuli khatvangha trident which menaces all dualistic dalliances’. Khandro Déchen comments:
Her khatvangha is self-caressed in the curvaceous crook of her left arm, where it seductively subdues every vestige of uncompassionate motivation. The three tines of her khatvangha pierce the fabric of attraction, aversion, and indifference. The secret nature of the khatvangha is Khroda Padmakara – her secret inner method nature.