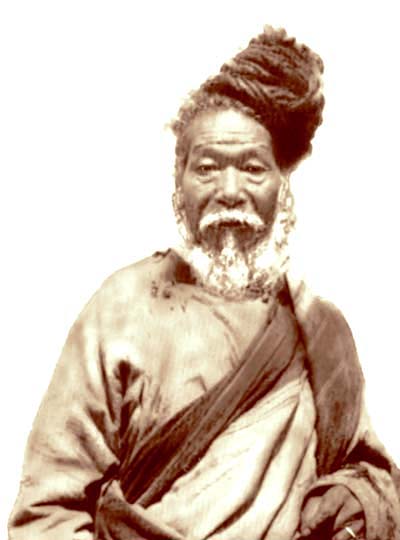 a great Dzogchen Master of the Nyingma Tradition

Dzogchen Sangchen Dorje Rinpoche was a Lama of the late 19th and early 20th Centuries who lived often as a wandering itinerant. He lived mainly in Sikkim but wandered also in Bhutan and throughout the Himalayan region practicing in caves and small out-of-the-way gompas.

The original gö-kar chang-lo shawl was a white shawl bordered by red on all sides – but this type of shawl in now only worn for empowerments and symbolic practices such as Tsog’khorlo. In the Aro gTér there are three Lineage Shawls which are used in empowerments: the peaceful shawl, the joyous shawl and the wrathful shawl. The peaceful shawl also serves for Dzogchen transmission. The joyous shawl equates also with Anuyoga transmission and the wrathful shawl with Mahayoga transmission.

Sangchen Dorje Rinpoche wears his hair in the Zor phud style. Ngak’chang Rinpoche comments:
There are many ways in which ngakpas, ngakmas, naljorpas, and naljormas wear their hair according to different traditions. Some examples are as follows:

There are other styles which accord with the many branch vows of Vajrayana and it is impossible to detail them all without precise knowledge of the branch vows concerned. ‘Turban’ styles exist as well as systems of wrapping the hair with various specified materials.

In the same style as Aro Yeshé, Sangchen Dorje Rinpoche wears a white chuba coat rather than the white shamthab and to-nga.