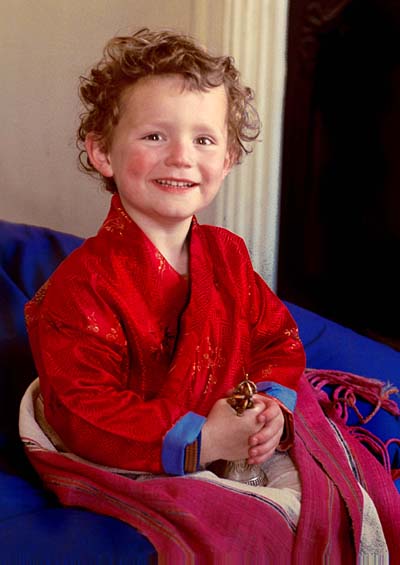 This photograph was taken at his home in Penarth in the Autumn of 2000. Robert is holding the bell and vajra given him by Kyabjé Künzang Dorje Rinpoche and Jomo Sam’phel and wearing the costume presented to him by Gyaltsen Rinpoche and Khandro Tséring.

Ngak’chang Rinpoche comments:
Robert has never been fond of dressing up but he will wear his chuba for tsog’khorlo. He understands that clothes have meaning and he enters into the spirit of tsog’khorlo with enthusiasm. We practise tsog’khorlo with him as his first introduction to Buddhist method, and he appears to be learning Seven-line Song by heart as a result of hearing it every day over every meal. We never specifically asked him to learn it – but we have always expected him to join in with the singing.