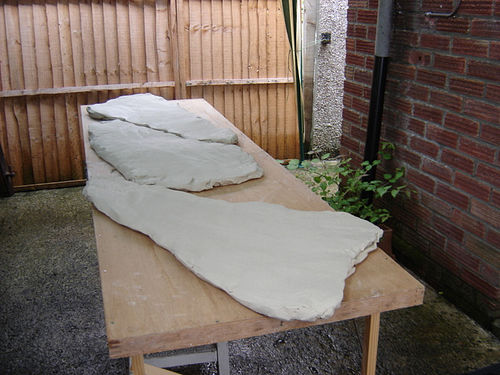 This picture shows the large clay slabs that had been rolled out to make the blades of a phurba during the 2005 craft retreat with Ngala Nor’dzin and Ngala ’ö-Dzin. The phurba – which will be about 1.5m high when constructed – will stand in front of the retreat hut. The clay slabs had to be allowed to dry to a ‘leatherhard’ consistency before they were cut to shape and joined together, so that they could support their own weight and shape. This was a tricky process and Ngala Nor’dzin was not convinced that it would be successful.

She comments:
Ngak’chang Rinpoche was keen that we made a phurba as this is a tradition in the Aro lineage. Clay is not like wood or metal though, and I was concerned that the result would be too organic for a shape that required preciseness of form and a sharp point. We used a scultural clay that we hoped would be strong enough to hold the shape. In the end I was delighted with the result – but we had yet to discover how well it would survive firing in the kiln.

As with the torma there were technical problems – the blades were too wide at the base to fit into the kiln! In the end a second phurba had to be made that fitted the kiln. The phurba will be placed so that it appears to impale the ground in a triangular base, in a triangular shaped area at the top of the garden at Aro Khalding Tsang.