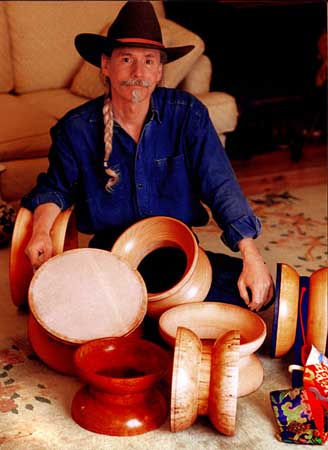 Craft is an important aspect of Vajrayana practise – as are each one of the Arts. The Arts are important because they are dynamically linked with the senses, the fields of the senses, and to the elements both externally and internally. Bringing form into being from empty potential through any of the Arts makes us resonant with the nature of reality in which form continually arises from emptiness. Consequently many practitioners within the Confederate Sanghas of Aro have become highly proficient within the field of Tantric crafts.

This photograph shows Naljorpa Rangdröl Dorje surrounded by gÇod drum shells. Ordained in Holland in 2000 he has been an apprentice of Ngak’chang Rinpoche and Khandro Déchen since 1991. He has a strong interest in the Arts of the Aro tradition and has made many of the gÇod drums used by the sangha in their group and personal practice of yogic song. Naljorpa Rangdröl is known for his quiet manner, easy-going smile and non-academic approach to the Buddhist teachings. Naljorpa Rangdröl teaches sKu-mNyé at both public and apprentice-only retreats.

Naljorpa Rangdröl says:
I see sKu-mNyé as an extremely valuable and accessible practice that can be approached by anyone, regardless of their current level of fitness and athletic ability. By proceeding slowly—with an awareness of individual capacity—anyone should be able to learn a few of these exercises and progress to the point where the ancillary benefits of the system can be realised.

Naljorpa Rangdröl’s interest in Buddhism began on meeting Chögyam Trungpa Rinpoche’s students in Wyoming in 1972 – after which he went on to participate in training programmes at Karmé Chöling in Vermont. In 1978 he moved to Tokyo, Japan where he taught English and studied with Soto Zen for over ten years. In 1990 he returned to the States – and met Ngak’chang Rinpoche and Khandro Déchen shortly thereafter.

He has become an extremely skilled drum maker – producing drums that are of a lighter weight than any gÇod drums available on the general market. This has come about through working closely with Ngakpa ’ö-Nyi Dorje who was himself instructed by Ngak’chang Rinpoche. Ngak’chang Rinpoche had personally researched the traditional form of gÇod drums as they were made in Tibet and his observation led him to return to the original shape of the drums. Both Ngakpa ’ö-Nyi Dorje and Naljorpa Rangdröl have honed the details of the dimensions their gÇod drums so they can be made far larger than previously possible – whilst remaining easy and comfortable to play for extended periods of practice. Through widening the rims of the drum it has proved possible to achieve an extremely thin drum shell to achieve the best tone and volume of these instruments. Naljorpa Rangdröl has experimented with adjusting the width of the band between the two halves of the drum shell, and the depth of the shells to more comfortably accommodate the individual player’s hand.