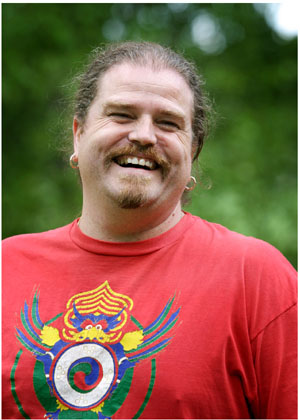 Naljorpa Bar-ché Dorje has been studying martial arts since he was 14 years old, which led to his becoming interested in spiritual practice. He practised Kabatinan for 10 years, but eventually found that he could not go all the way with that system as there were some aspects he found unacceptable. Because of this, he maintained his search for a teacher and a lineage in which he could place complete trust.

Naljorpa Bar-ché felt a deep attraction to Vajrayana Buddhism and first went to Amsterdam to practise Tarthang Tulku Rinpoche’s physical system. He read many books at that time, eventually discovering those written by Ngak’chang Rinpoche and Khandro Déchen. When he read Journey into Vastness he was so excited by it he wrote to the address in the back of the book asking if he could receive teachings. Ngala Nor’dzin answered his letter and he attended the first open retreat he could, in Wales in 1992. He has been an apprentice ever since then.

Bar-ché Dorje was ordained in January 2000 as a Naljorpa and has studied sKu-mNyé since first becoming an apprentice. He has travelled to Wales many times to receive teachings and transmissions from the Lineage Lamas, as well as travelling to New York, California, Austria and Nepal for that purpose. Naljorpa Bar-ché has a great natural ability for the physical yogas and vajra dance and this, combined with his dedicated practice, hard work, and devotion to his Lamas, has made him an expert in these areas. At the request of Ngak’chang Rinpoche and Khandro Déchen, Naljorpa Bar-ché has taught sKu-mNyé on apprentice retreats and open teaching retreats in California, New York, and Wales.

Naljorpa Bar-ché is known for his accessibility, warmth, humor and his great devotion to his Root Teachers. He is a gifted sKu-mNyé teacher and greatly enjoys helping others learn the practices in which he has become an expert.