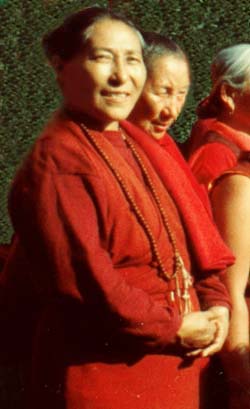 Ngakma Yang’dzom was born in 1941 in Western Tibet, as one of five children of a nomad ngak’phang family. Her father was her first teacher, and taught her to read and to write. Her father was a yogi who integrated his retreats into his working life whilst herding the family’s yak and dri in remote areas – and was a great example to her.

She was twelve years old when her father died – and in 1959, when she was eighteen, she escaped from the Chinese together with her mother and siblings. After one month of walking they reached India. There, she found employment road-working in Kulu and Manali, in Himachal Pradesh. At the age of twenty-one she got married to a ngakpa and shortly after, met a Drigung Kagyüd Lama called Könchog Rabten who helped her with her practice. She continued as a road-worker after the age of twenty-one – and during her tenure as a road worker, she gave birth to five children. She then worked in several different carpet factories, initially in India – and after 1988 in Nepal.

When asked if time remained for practice during her life as a road worker and carpet factory employee, she smiled intensely and said:
There is always time for practice. In the evenings I used to put my youngest baby on a cushion next to me, and simply practise. During that period there was never time for a solitary retreat – but today, thanks to support from the students of Ngak’chang Rinpoche and Khandro Déchen, I live in Tsogyel Gé’phel Jong, where I can practise four thuns (thun – meditation sessions) a day in semi-open retreat.