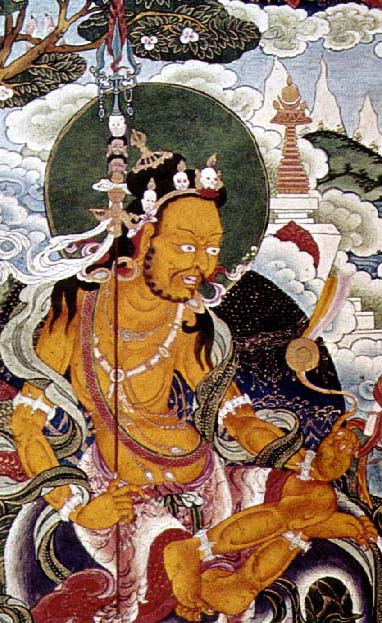 The Eight Names of Padmakara: The Rays of the Sun Manifestation

Nyima ’ö-Zér (bLa ma nyi ma ’od gZer) is the archetypal yogi. He carries a khatvanga as the symbol of being in union with his sang-yum or female consort. He wears a five skull crown as the symbol that he has transformed all neuroses into the wisdoms of the five Buddhas and their consorts. His body ‘speaks’ the twilight language of the play of emptiness & form. He is neither shaven nor does he have a beard, but wears the ‘designer stubble’ of the charnel ground. He glows with vitality but his skin is the colour of death. His finger stops the sun in its tracks – all time is frozen, and with it all dualistic strategies.