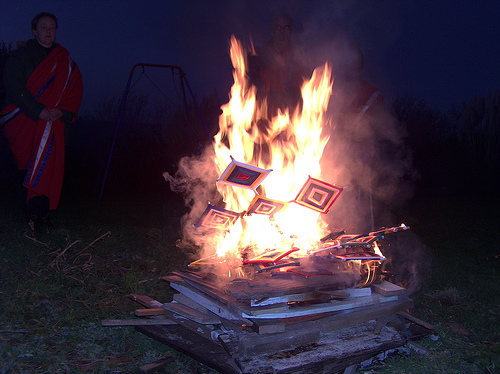 This photograph depicts the Namkha burning ceremony held at the end of the Namkha Apprentice Retreat in Cornwall, November 2005. A namkha (sky-weaving) is composed of threads of wool or silk which are the colours of the five elements: blue, green, red, white, and yellow – space, air, fire, water, and earth respectively. Ngak’chang Rinpoche comments:
These threads symbolise the ‘thread’ that is the literal meaning of the word ‘tantra’ and describe the manner in which each point in time and space is the warp and weft of the loom of experiential / existential emptiness.

Ngala Nord’zin Pamo and Ngala ’ö-Dzin Tridral’s apprentices had spent a happy five days weaving a number of Namkha. For some this was already a well loved practice, and for others it was their first experience of it. By the final night of the retreat most practitioners had completed at least two Namkha. Many hours had been spent weaving the five elemental threads whilst reciting the elemental awareness spells. Each Namkha design of the five elements was tailored to the practitioner’s compassionate view of the need of a particular individual or situation.

As dusk approached a fire was built and lit under the vast Cornwall night sky. After preparation and singing the awareness spell of Yeshé Tsogyel, the practitioners placed their Namkha onto the fire. As the Namkha burn, the intention of the practice is released for the benefit of the person or situation.