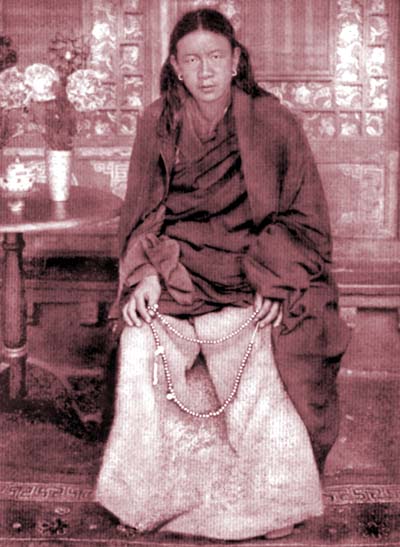 Head of the Mindroling Lineage of the Nyingma Tradition

Minling Trichen Rinpoche (sMin gLing khri chen rin po che) was the throne holder of Mindroling until his death in 2008. He lived in relative seclusion in Clement town near Dehra Dhun, in northern India, where Mindroling Gompa has been re-established. From the age of three to eight years old, Minling Trichen lived in Kham in an area called Kham Lumo-ra. His family lived mostly in the wilds – but after his father passed away and his family came back up to central Tibet, and he began his studies at Mindroling. His studies began with the Tantras – and he particularly loved to read the Pema Kathang. There were three sets of Mindroling which he had to memorise, and recite by heart in front of the general assembly of Mindroling. This was followed by the studies of ritual texts of the oral (bKha’ brGyud) tradition and the Nyingma and Sarma Tantras. Under Khen Rinpoche he studied all the main texts, including the Ngöndro Rinchen Them-ké (sNgon ’gro rin chen them sKas). He also studied chant, gar ’cham (Tantric dances), calligraphy, poetry, and grammar. When he was eighteen, he entered into a four year retreat, during which he completed the practices of the Oral Tradition (bKa’ brGyud), Phurba, and the ‘Essence of Secret Tantra’.

HH Minling Trichen’s family lineage is the lineage of Nyo (gNyos). It originates with a lha (an extra-dimensional being) who descended from heaven to the top of Kha-rag-ri. The lha, being affected by people’s obscurations, could not return to his dimension and remained in the human world. He met a girl from Kharag-ri and through their union she gave birth to a son who was gTérdag Lingpa. There had been thirteen generations from gTérdag Lingpa up to this Mingling Trichen. The Nyo family lineage has two lines – the male ‘bone’ line and the female ‘blood’ line. The bone line continued to Tri Yeshé Wang-gyal but died out because he had no sons. Tri Yeshé Wang-gyal had nine daughters and so the blood line continued.

Mindroling Monastery is renowned for its tunes and styles of chanting. The collected literature of Mindroling is called ‘The Four New Visionary Treasures of Mindroling’ (sMin grol gLing gi gTér gSar bZhi). The Fifth Dala’i Lama was an incarnation of Chögyal Trisong Détsen, and gTérdag Lingpa was an incarnation of Vairochana, therefore their relationship was close. The gTérma teachings revealed by the Fifth Dala’i Lama – known as ‘The Sealed Secrets of Celestial Visions’ (dag sNang gSang ba rGya can – all the gTérmas revealed by the Fifth Dala’i Lama were Mind gTér – dGongs gTér) and the four gTér of gTérdag Lingpa mutually complement one another. They are described as being like mother and son teachings.