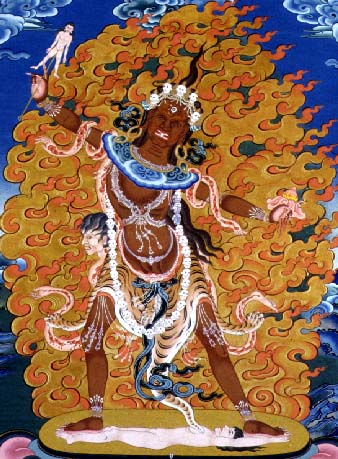 The primary protectress of the Nyingma Tradition

Mamo Ekajati (man mo e mKha dza ’ti) is the non-dual queen – the most inportant of the Ma Za Dor Sum (the three protectors of the Nyingma tradition). There are various spellings of the Sanskrit name Ekajati in Tibetan – either ‘e mKha’ or ‘ye ka’. Either ‘e’ or ‘ye’ mean ‘primordial’. ‘E mKha’ means primordial sky, and relates to Ekajati particularly as she functions with regard to the Dzogchen teachings. In relation to the Dzogchen teachings she is known as ral-chig ma (ral gCig ma) – the single-plait mother. Her single tuft of hair, eye, tooth, and breast, are symbolic of non-duality. She wears a cloud as a garment to indicate that she dwells within the expanse of the sky. In her right hand she wields a human corpse as a symbol that duality destroys itself of itself and with itself. In her left hand she holds a ripped out human heart – the uncompassionately murdered heart of aggressive self-justification. She tramples on the corpse of duality. In this depiction she wears the human bone cemetery ornaments and the tiger skin skirt of a yidam – to display her mastery of all enlightened activities.