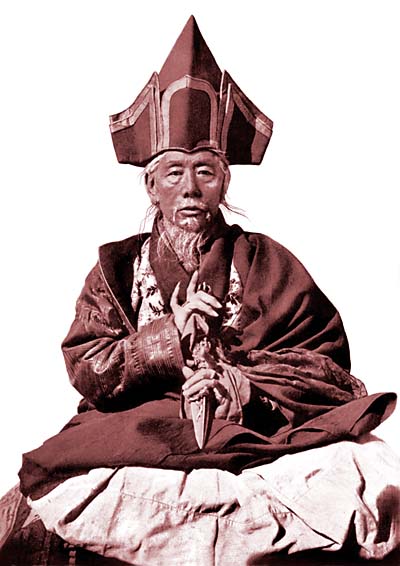 Ling-tsang Gyalpo was a ngakpa, gTértön, and prodigious phurba master of the Nyingma Tradition who was an incarnation of Ling Gésar – the Tibetan Spiritual-warrior hero. This powerful Lama was known both for his overwhelming kindness, and for his siddhis in connection with the practice of Dorje Phurba. The phurba which he wields in this photograph is one of the treasures of the Confederate Sanghas of Aro. Ling-tsang Gyalpo wears a special type of Dorje Zahorma hat which is used for the practice of Dorje Phurba. The phurba hat in the Aro gTér tradition is dark blue and edged with green and has a wrathful eye emblazoned on the front-most lotus flap of the hat and three wrathful eyes on the back. It is similar to the Za Rahula hat which is completely black. Ling-tsang Gyalpo’s hat is dark maroon edged with red. He wears the white shamthab of a ngakpa and has the uncut hair of the gö-kar-chang-lo. Ling-tsang Gyalpo wore his hair in the thor chog (thor cog) style – a braided bun at the back of the head. This was a style often adopted by phurba masters. He is performing the demon dispelling mudra and engaged in the practice of impaling the four demons of dualism.