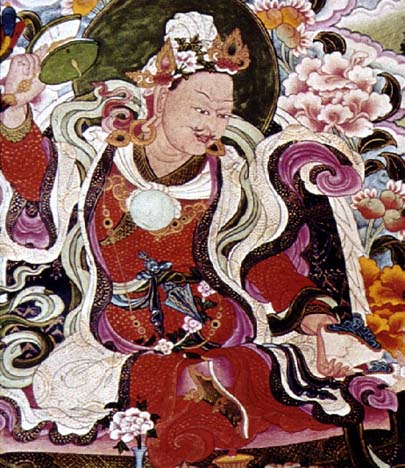 The Eight Names of Padmakara: the ‘Emperor’ manifestation

Loden Chogtsé (bLa ma bLo lDan mChog sred) is the manifestation who describes power in terms of its unseen source. The king may well ride in battle with his army, but the emperor moves great armies in his own mind. Everything is accomplished by the emperor without the need of effort. This style of enlightened activity goes beyond individual intervention and describes a state which considers the benefit of beings in a vast sense. In his right hand he holds the damaru which purveys ‘the sounds of Dharma’ , and in his left hand he holds a skull bowl brimming with ocean of düdtsi – the nectar of immortality. The nectar of immortality represents the recognition in which birth and death are undivided in the continuous uninterrupted eternal moment of rigpa. The mirror (mé long) suspended around his neck is the space in which everything is reflected ‘as it is’ . The sound of his damaru is ‘heard’ within the vastness of the mirror in which its influence is infinitely subtle – yet unlimited. The ocean of düdtsi with its waves are replicated in the imagery of the mirror with its reflections