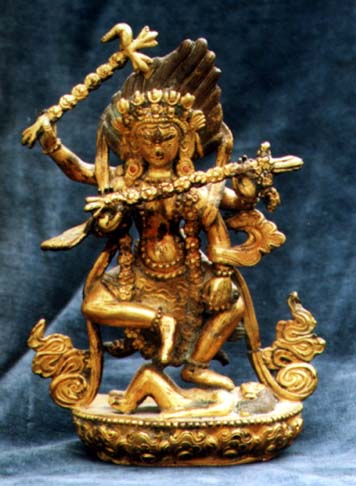 Khandro Déchen comments:
The sense of ‘harsh sound’ here relates to her non-dual lasciviousness – the non-dual impropriety of her total appreciation. Her ‘harsh sound’ is merely harsh in the ears of those who are timid and afraid of their own existence.

She is said, according to common folk custom, to be of assistance to unhappy lovers – but her activity as a yidam concerns the transformation of obsessive craving. Kurukulla transforms dualistic desire into non-dual desire through her unbridled vajra lust.

Here she wears the five-skull crown which is usually associated with the wrathful awareness beings – but contrasts this with wearing flower ornaments rather than human bone cemetery ornaments.

This statue is kept in Ngak’chang Rinpoche and Khandro Déchen’s own shrine room, and was given to them by Khamtrül Yeshé Dorje Rinpoche.