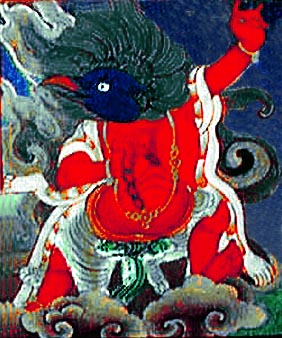 In this image the khandro (mKha’ ’gro – dakini) is a yidam, which can be discerned by the fact that she is wearing a tiger skirt rather than a leopard skirt. She is holding a chain which symbolises overcoming the four philosophical extremes of eternalism, nihilism, monism and dualism. These are sometimes known as ‘the Four Denials’, being the philosophical extremes that Dharma denies.

Eternalism maintains that all circumstances unfold according to an unchangeable plan or design. This distorted view denies the emptiness of the possibility of change or chance. Nihilism distorts non-dual reality by maintaining that all actions are empty of meaningful value. Monism distorts non-duality by asserting that ‘everything is one;’ in denial of apparent distinctions and compassionate connections. Dualism denies non-duality by declaring that emptiness and form are divided.